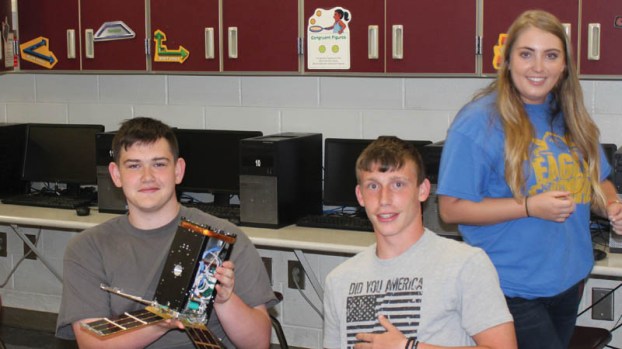 Dawson-Bryant High School students hold the engineering prototype for the CXBN-1 CubeSat that Morehead State University sent into space in 2012. Morgan Harrison, right, is a Dawson-Bryant graduate, is majoring in space science at MSU.

Bringing space to her alma mater

COAL GROVE — Dawson-Bryant High School students were visited on Friday by a recent graduate who sought to motivate them in math skills.

Morgan Harrison took time out of her college break to visit the school. She will be a senior next year, majoring in Space Science at Morehead State University.

Students were able to hold the engineering prototype for the CXBN-1 CubeSat that Morehead State University sent into space in 2012.

Harrison encouraged students to take challenging math and science classes in high school. She also recommended that students learn how to study. She told them that just because they make straight A’s, it doesn’t mean they know how to study.

It will be a lot more challenging when they take more rigorous classes in college, she said.

The Space Science Center, located at MSU, is a $15.6 million facility that houses state-of-the-art equipment and laboratories. It has launched six satellites since 2011 and is proud to currently hold eight contracts with NASA.

Its next launch will be the Lunar IceCube, which will search for water on the moon in 2019.

Morhead State University’s unique program is one of only five in the nation and has a 100 percent job placement.

Dawson-Bryant is proud to have two alums currently enrolled in the Space Science degree program at Morehead State University.