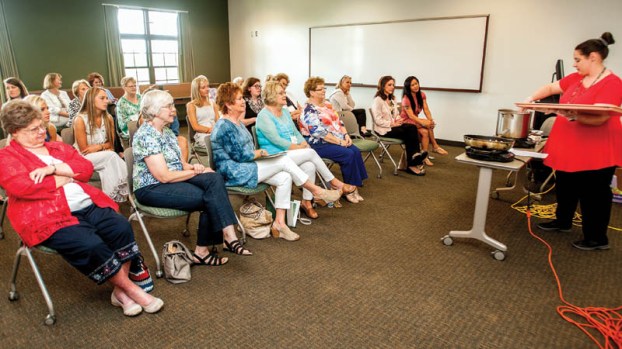 Heidi Clark, owner of Spice of Life Catering and Events, conducts the session Get Ahead on Your Meal Prep during the annual Ohio University Southern Women’s Conference on Friday.

PROCTORVILLE — For the last several years, Ohio University Southern has been providing a forum where women can network and have opportunities to learn about a number of topics.

On Friday, more than 100 attended the annual Women’s Conference at the school’s Proctorville Center.

Keynoting the event was motivational speaker Nora Stanger, a Lawrence County native who serves as the Appalachian Outreach Chair for Sinclair Community College in Dayton.

Stanger said she was there to speak on “the richness of Appalachia” and the challenge to “not forget who we are” when viewed next to other regions and culture.

She said that many people spend their lives leaving the area and coming back, and spoke of the need to do outreach to other cultures.

“We’re not just about substance abuse,” she said of the region.

Stanger said there is one thing in particular that stands out about the region.

“The strength of our faith and our extended family commitments,” she said.

Also speaking at the conference was Huntington Fire Chief Jan Rader, whose work combating the opioid epidemic in the region was chronicled in the film “Heroine(e),” which was a nominee for Best Short Subject Documentary at this year’s Academy Awards.

Rader spoke of the initial attempts to tackle the crisis, with the “River to Jail” initiative, which focused on prosecuting dealers.

“If you crossed the river to sell drugs, you went to jail,” she said.

Although this resulted in 226 arrests within a few weeks, Rader said this not solve the problem.

“It became obvious to leaders that we could not arrest our way out of the problem,” she said, stating that for every bust made, five or six dealers were there to take the place of the one charged.

She said Huntington’s Mayor Steve Williams reached out to first responders to form the Mayor’s Office on Drug Control Policy.

One of its focuses was on keeping real time data on overdose rates.

The average age of those who overdosed was 38 years old, with 69 percent male and 31 percent female.

“But guess what happened next?” she said of the release of the statistics.

Bad press followed, with many media outlets declaring the city the “Overdose capital of the nation.”

“That’s not the case,” Rader said, pointing out that rates in Huntington were not as high as other cities.

“Education is key,” Rader said, stating the city then reached out to the “stakeholders” in the community, such as faith groups in working to battle the epidemic.

In this, she agreed with Stanger, stating that the faith and community bonds in the region had helped it to deal with the opioid abuse issue and reduce rates.

“There’s strength in banding together,” she said.

She said she and Williams had recently attended a conference on the issue, featuring leaders from six cities, including Knoxville, Tennessee, Tacoma, Washington, D.C. and Madison, Wisconsin.

While Huntington is smaller than those cities, Rader said the city was making more progress and leading the way.

Kristi Barnes, an associate professor in psychology with OUS served as co-chair of Friday’s conference.

“We hope to give women something new to empower them,” she said of the event, in its seventh year.

She said she was happy with the turnout.