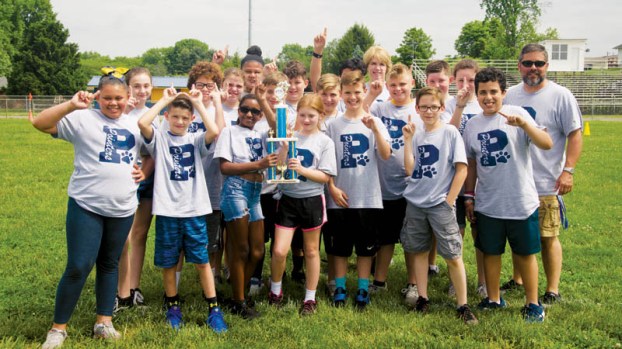 Principal Chris Mathes and fifth grade students from Mrs. Phillips’ class at South Point Elementary School hold the trophy after the school won the final tug of war match in their annual Field Day against Burlington Elementary on Tuesday.

SOUTH POINT — It took five years, but the trophy is back at South Point Elementary.

Students from the school faced off against Burlington Elementary on Tuesday in their annual Field Day competition.

Third through sixth grades competed in a variety of matches on the track at South Point Elementary, as part of a competition between the two rival schools for seven years.

It all led to the final tug of war battle between the graduating fifth grade students at the schools, the winner of which gets to take home the coveted trophy to display in their school for a year.

In the end, South Point was able to break Burlington’s winning streak.

“We finally got it back,” South Point Principal Chris Mathes said. “They’ve had it for every year, except the first year we did this.”

The two schools, both in the South Point school district, have been hosting a joint field day for seven years, he said.

Students from Burlington are bussed in each year for two days of activities, with primary students facing off on Monday and the upper grades on Tuesday.

The academic year is nearly finished for the two schools, who will each host their fifth grade graduations on Friday.