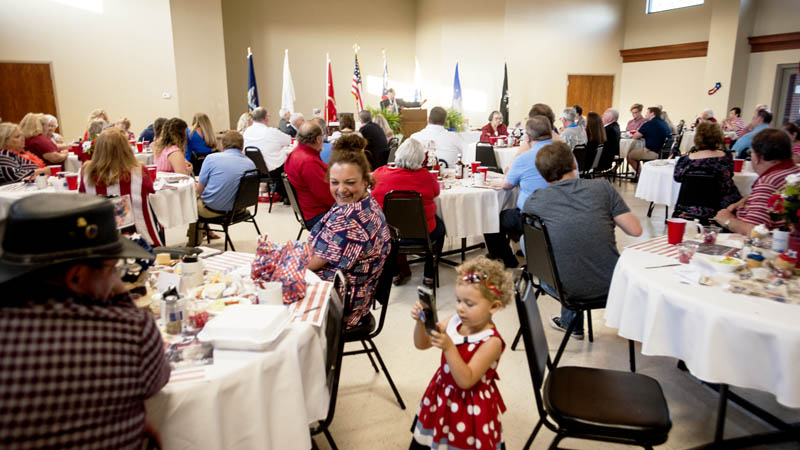 Area residents gathered on Tuesday at the Knights of Columbus Hall, in Ironton, to take part in the annual Past Grand Marshals Dinner in honor of the 150th year of the Ironton-Lawrence County Parade.

Dinner for past leaders took place at Knights of Columbus

The step off of the Ironton-Lawrence County Memorial Day Parade is only days away and lead-up events for the festivities have started.

On Tuesday, about 100 attended the past grand marshals dinner at the Knights of Columbus on South Third Street to honor those who have led the parade in years past and to pay tribute to its century and a half of history.

Retired Lawrence County Common Pleas Judge Richard Walton served as master of ceremonies, introducing those who would lead the parade for this year’s sesquicentennial.

Brent Pyles will handle the duties as grand marshal on Monday. He previously held the position for the 2007 parade.

Along with his wife, Lou, he has served on the parade committee several years and has been one of its chief organizers.

“It started on May 30, 1868,” Pyles said of the parade. “And we’re going to do it again this Monday — honor those who have given their lives in service to this nation.”

He said the parade was a “staple of the community.”

Everyone has a piece in their DNA.”

He said that no other city in the nation can say they have hosted a parade around the holiday for 150 years.

“When Capt. McQuigg stepped off that first parade, he had no way of realizing what he started,” Pyles said. “I’m looking forward to stepping off Monday with my parade commander, Rich Donohue.”

Donohue said he was “blessed to be around individuals who have carried the torch.”

“It’s been a tradition in our family,” he said. “I don’t know the last time we’ve missed. We’ve always attended.”

He said he was taught the importance of the event by his parents.

“They instilled the importance of honoring our veterans,” Donohue said. “We’ll do everything in our power to continue this parade for as long as we can.”

Ray Ratliff, 92, was honored for his long history with the event. He is serving as this year’s honorary grand marshal.

Ratliff said he moved to Ironton in 1949, when his father bought Central Hardware, which has served the community ever since.

“It is a great honor,” Ratliff said. “This parade is not only for those who lost their lives and not only in remembrance of those men, but for those who survived and came home. We salute them and let them know they are not forgotten.”

The keynote speaker for the evening was Jim Volgares, a commander for the American Legion.

Volgares spoke of the Legion’s activities, from poppy sales to youth programs and scholarships.

“We are investing in the youth, because the youth is the future of this country,” he said.

Also honored at the dinner were immediate past grand marshal Herb Brown and Lori Donahue for her musical contributions to the events surrounding the parade.

Boy Scout Troop 106 received the Williams Joseph Williams Award for their service in assisting the parade, from walking its length and carrying banners to cleaning up litter in its aftermath.

Dave Lucas, troop leader for the Scouts, said of the clean up, “After you go, our job begins.”

He spoke highly of the members commitment to the event and also praised the “unsung heroes” who organize it each year.

“My God bless you all, and let’s get this parade rolling,” he said.

To save and protect