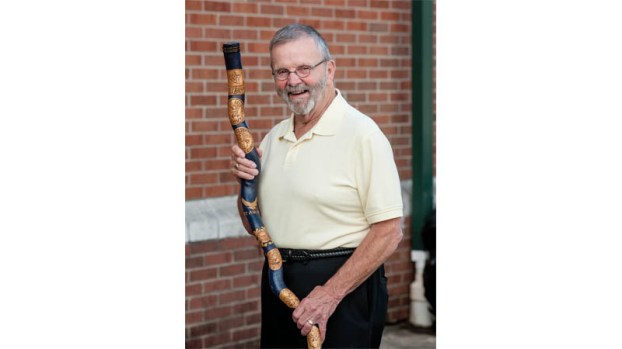 For the past decade, Charlie Cook has been carving a special cane for the grand marshal of the Ironton-Lawrence County Memorial Day Parade.

Reign of the cane

Charlie Cook has become known for the intricate canes that he carves every year for the grand marshal of the Ironton-Lawrence County Memorial Day Parade.

Like most boys, he had a pocketknife and would try to carve bits of wood into something.

And like most boys, it was a little hobby that fell by the wayside, as he got older.

“It was quite by accident,” Cook said. “It was just happenstance, really.”

But he got into it again when he and his wife, Donita, were on vacation in the Smoky Mountain region of Tennessee.

On the last day, he was at a wood carving shop when he spotted a sign about a class being held that night.

“I thought that would be pretty neat and took another three days off and took the wood carving class,” he explained. “I carved two or three items in the class, brought them home, put them up on the shelf and then didn’t really think about it again.”

One day, Donita decided she was going to paint one of them and re-fired his enthusiasm.

He started carving again, turning pieces of wood into Santa Claus, angels, and small animals. He has done a few bowls and of course, the canes. He uses hand tools to carve his figures and canes and Donita paints the finished products.

“I tell everybody that if I carved the way I painted, I wouldn’t have any fingers left,” he said, with a laugh. He does sell the items but “I don’t really do much in the marketing of them.”

His Santa Claus figures became a popular item and that is how he met Lou Pyles, the Memorial Day parade organizer.

“She has been collecting my Santa Clauses for a few years,” Cook said. “And when Bill Ellis passed away, she called me and asked me if I would be interested in taking over making the canes. And I said yes.”

Every January, Cook gets a call from Pyles on what the theme for the parade is going to be and he does research to find images that represent the theme. This year, he spent about a month, on and off, researching the design and then about three weeks carving the cane.

“I like this year’s cane,” Cook said. “It has a bust of Union solider and gold bands with letters down the side.”

“I did that one year, I liked that really well,” Cook said.

Dancers from the Yvonne Dekay School of Dance have participated in the Ironton-Lawrence County Memorial Day Parade for many years,... read more