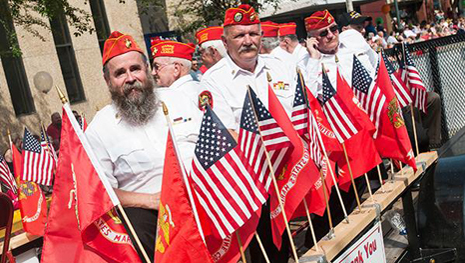 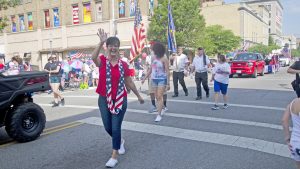 After months of heavy planning and preparation by organizers, the milestone 150th anniversary of the Ironton-Lawrence County Memorial Day Parade drew tens of thousands to the city on Monday to honor members of America’s military.

“It’s pretty well attended, all around,” grand marshal Brent Pyles said, noting the entire 2.5 miles of the procession’s route was heavily packed. “We haven’t seen any gaps in the crowd.”

Pyles, who previously served as grand marshal in 2007, was standing along South Sixth Street with parade commander Rich Donohue, guiding the 12 divisions and hundreds of participants to the end of the march.

“It’s pretty warm, but we’re holding up,” he said, as the sixth division passed at about noon, the midpoint of what turned out to be a roughly four-hour event.

Pyles said this year’s parade was larger than previous years and that organizers had conducted density counts of the crowd and were estimating turnout at about 27,000-29,000, but maybe higher.

Escorted by Sheriff Jeff Lawless, the parade stepped off and made its way down Center Street. The first division included a gunnery salute and riderless horse, in honor of those who died in service, while Mayor Katrina Keith and parade goers stood respectfully as “Taps” was played in memory of the fallen.

The somber remembrance was followed by many displays of patriotism to honor those who survived and returned home. Veterans of all conflicts were invited to march in the first division, where they were cheered by the crowd.

Watching on South Third Street, with his dog, was Caroll Stamper, 79, a Vietnam veteran, who said he has been attending for decades.

He paused to point out the amphibious tank coming down the street, similar to one he had rode in during his service.

Of the parade, he said he is glad to see the tradition continue every year.

Many organizations representing veterans took part in the event, such as the American Legion, AMVETS, the VFW, the Military Order of Purple Hearts, Honor Flight and Ohio Flags of Honor.

While the 100th anniversary of the parade was rained out in 1968, weather for this year’s event was sunny, with blue skies for the F-16 flyover of the event.

“It’s going good,” Lou Pyles, of the parade committee, said. Along with her husband leading the procession, she has been one of the key organizers of the event.

“We got our flyover, and we have another one coming,” she said, adding that the weather was ideal for the day.

Watching the parade from Center Street with her family was Misty Depriest, of Pedro. She said they had picked out a spot at 9:30 a.m., about a half hour before the step off.

She said they come every year and that the parade’s most important message was “to remember veterans and everyone who served.”

With graduations just wrapping up over the weekend, many of the participants proudly wore their mortar boards while marching.

The El Hasa Shriners were, as always, a big hit with the crowd, with their group’s presence including vintage cars, their well-known Oriental band and the members of Hillbilly Clan Outhouse 8, driving their signature trucks and spraying parade goers with water guns.

The group has been participating in the parade for generations, with members estimating at least 50 years of attendance.

Waiting on Center Street to pull out was John Winters, driving a 1914 Model T, with passengers dressed as Betsy Ross and the Statue of Liberty.

He said it is the vehicle’s fourth year in the parade and said one of the event’s greatest purposes is helping to reunite the community.

“People get to see people they haven’t seen in years,” Winters said.

Serving as honorary grand marshal this year was Roy Ratliff, while Herb Brown was the parade’s division commander.

In addition to the parade leadership, many helped pull off the logistics of the event.

One of those groups was the Amateur Radio Emergency Service.

“We’re helping coordinate all the decisions,” Mike Love, with the group, said, adding that the organization was also there to contact emergency services such as ambulances, should they be needed.

Many scout troops marched in the parade, including Boy Scout Troop 106, of Ironton.

Working in the staging area north of Center Street, scoutmaster Dave Lucas said the troop had been helping to carry banners, walking the parade route and would be helping with clean up. The group was honored at last week’s grand marshals dinner for their years of work in the parade.

He said one of the best things about the parade was how it “pulled the community together.”

“Just look at how beautiful Ironton looks,” he said of the clean up and decorating downtown. “There was no big company involved doing that. It was the community.”

Lucas cited the artwork of Ironton High School students that had been placed in the empty windows of the Brumberg building. He said photos of the work had circulated online and had received praise from as far away as South Korea.

He said the parade give the community a chance to make a statement.

“It shows that Lawrence County has reached a turning point,” Lucas said. “It’s a moment for us to look at ourselves and say, ‘We’re going somewhere.’”

Reign of the cane