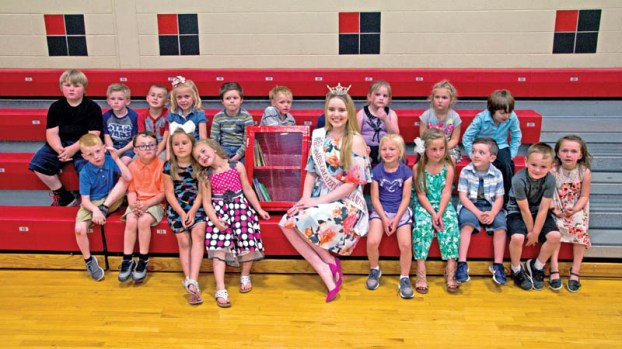 DEERING — Kindergarten students at Dawson-Bryant Elementary received a parting gift in the final week of school from a familiar guest.

A resident of Lawrence County, she attends Huntington High School. She is set to compete for the title of Miss Ohio Outstanding Teen on June 13.

Fosson has been visiting the school, along with Fairland East and Symmes Valley elementary schools, regularly over the last few months to read to the students.

On Thursday, she returned to the school, where she presented the kindergarten class with a reading box.

According to school policy, the youngest students have to wait a few years before they are given the privilege to check books out from the library.

Through a partnership with Collins Career Technical Center, Fosson has been delivering the boxes to the schools. They are filled with books, each of which has a sticker indicating it came from the initiative, and students may borrow and return them.

Fosson had a few options for the path to compete for the state title. She decided to enter for Greater Cleveland Outstanding Teen, as that pageant was open to entrants statewide, as opposed to others, which were closed to certain counties.

She said the points on her crown stand for “style, service, school and success.”

After winning, titleholders are asked to come up with a program, so she developed the service program for the schools.

“I love working with kids,” she said. “I work at a tea cottage with kids and love that.”

Fosson has been popular with the students, many of whom greeted her with hugs when she entered the room on Thursday,

“Oh, my goodness,” she said of the experience. “It’s been wonderful. They’re the sweetest kids. They love stories and they ask so many questions.”

She said she has received a lot of questions from the children about one thing in particular.

“They’re always fascinated with my shoes,” she said. “They’re wonderful kids. Their teachers and parents have done such a good job raising them.”

Fosson, who will be a senior at her school in the fall, serves as team captain of the speech and debate team, which is evident in her presentation skills. She also is the secretary of the thespian club and is involved with local theater groups, such as First Stage, in Huntington, and the Paramount Players, in Ashland, where she starred in a recent production of “Fame.”

She is undecided which college she plans to enroll in, but said she “has a list” of possibilities. She is considering musical theater, fashion or business as possible fields of study.

Fosson has also auditioned for Destination Broadway, a summer program offering acting and singing classes in New York. She said it was a teacher there, Tiffany Haas, who urged her to enter the pageant in Ohio.

Of the pageant, Fosson has had a positive experience.

“It’s been so inspiring, to be surrounded by so many supportive accomplished women,” she said.

The winner of Miss Ohio Outstanding Teen will go on to compete for a national title. The pageants are one of the largest scholarship programs for women, she said.

Fosson described the atmosphere as “a sisterhood” and said it defies the stereotype of pageants being full of “catty” competitors.

“It’s not like that at all,” she said. “Everyone is so supportive and we try to promote our platforms.”

Fosson’s mother, Debby, was at the school with her on Thursday.

She said that her daughter has bonded with the students during her visits.

“The kids love to come up to her,” she said.

She recounted one experience, in which Olivia was reading the book “Grace for President,” in which the title character runs in a mock election after finding out the United States has never had a woman as chief executive.

Debby said her daughter then asked the children what they wanted to be when they grow up.