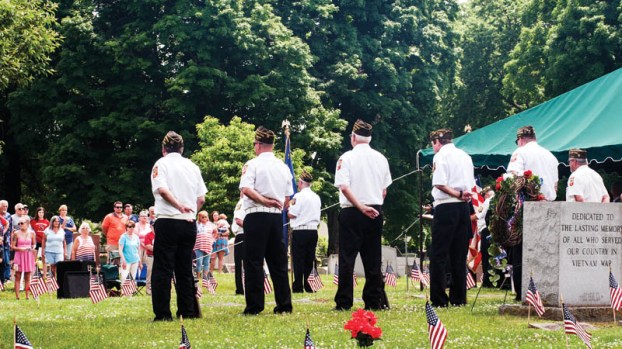 Around 75 people attended the 2018 Veterans Memorial Service at the Soldier’s Plot in Woodland Cemetery on Sunday to honor the fallen military men and women interred there.

“For 150 years, the citizens of Lawrence County have gathered to pay homage to those who committed themselves to the defense of this great nation,” said attorney Mark McCown, who was the master of ceremonies. “What began as the Grand Army of the Republic’s Decoration Day, a day to place flowers on the graves of Civil War veterans who gave their lives for the union of this great republic, has transformed over the years into other traditions.”

He said Memorial Day has become a day to honor all veterans but the day is a day of remembrance.

“The cost of the freedom is high, even as we see today, thousands of people rise up across the world to rise up against tyranny so that they may get a taste of the freedom we hold so dear,” McCown said. “Today, we gather among these flags, these symbols of freedom, these symbols of democracy, that are placed in front of these tombstones to honor the memories of those warriors who won that freedom for us.”

The main speaker for the ceremony was Staff Sgt. Kurtis Bailey. He enlisted in the U.S. Army at the age of 17 as a combat engineer. He was employed in Afghanistan from 2012-2013. He currently serves with the 149th Vertical Construction Unit in Cynthiana, Kentucky.

He addressed his gratitude to “all the veterans here today for paving the way for my generation.

It is not many times we can come together and I am able to address my fellow veterans from Vietnam and so forth. You guys have paid the ultimate sacrifice, your trials and tribulations that you guys have went through, and have lead to where we are today.”

He also thanked the military families for being the foundation that soldiers, sailors, Marines, Coast Guard and airmen need.

“You guys have kept us grounded through the very hardest times in our careers,” Bailey said. “I personally thank you for sticking it out and being the tough, being the brave.”

Wreaths were placed on the monuments dedicated to fallen soldiers.

VFW Post 8850 of Ironton provided the honor guard for the ceremony.

By Bob Leith Decorating the graves of war dead was an ancient pagan custom. From ancient times, people have memorialized... read more