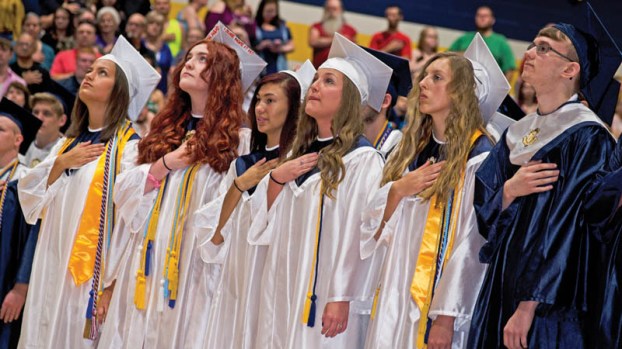 Principal Ben Coleman said this group was a special one for him, as he had known them for five years, since teaching the students in eighth grade at the middle school.

“They are a tremendous group of leaders,” he said.

Coleman said the students had requested the ceremony be used to honor the memory of a classmate who was no longer with them.

Angel McGinness was killed in a crash by a drunk driver in 2011. She was a fifth grade student in South Point schools at the time.

McGinness’ family was in attendance at the ceremony and were recognized by Coleman.

“They planned a tribute for her,” Coleman said. “There will be a chair and a cap and gown for her. That’s the kind of kids they are.”

Karissa Patrick was the school’s valedictorian and Nicholas Wood was salutatorian. Both plan to attend Wright State University.