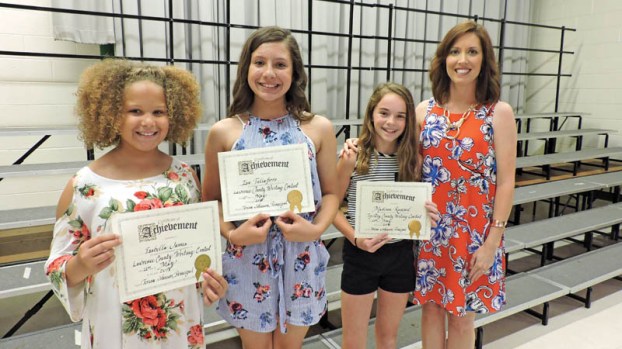 Reading Awards of a special trophy were presented by Gail Phillips, fourth grade teacher, to students who read at least 50 books, of at least 75 pages each, over the academic year.

The student in the fourth grade who read the most was Molly Dunlap, at 466 books.

After taking an online test, Ferguson qualified to compete in the regional be at Ohio University in Athens on March 26. She competed against students in fourth, fifth, sixth, seventh and eighth grade and Leep said Ferguson had to learn to spell more than 2,000 words through all of the competitions.

“The hard working students of Fairland West make me feel proud of them,” Principal Teresa Johnson said. “These awards would not be possible without the support of loving and caring parents who make learning a priority in their homes. I am grateful for the continued support of the families in our community. I feel that Fairland is fortunate to have such talented teachers who work hard every day to educate our future citizens.”

As students gathered on the steps of Ironton High School on Sunday for their Class of 2018 picture, there was... read more