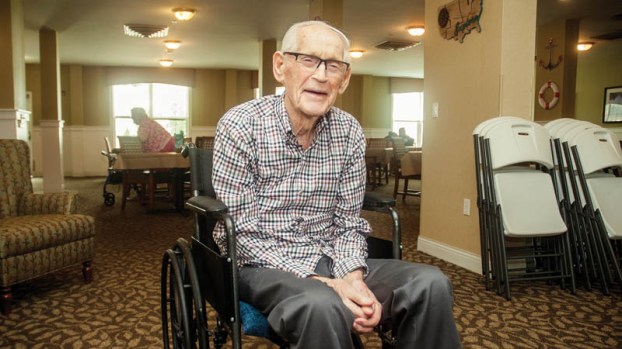 Mason Maynard, a resident of the Wyngate at RiversEdge in Proctorville, will celebrate his 100th birthday today.

Reaching the big one

ROME TOWNSHIP — Mason Maynard, who resides at the Wyngate at RiversEdge will be celebrating a century of living today.

Woodrow Wilson was serving as president of the United States, the Model T Ford was the most popular automobile and the great powers of the world were mired in World War I.

Raised in Keysville, Maynard was the youngest of five children of Ernest Maynard and Idella Napier-Maynard.

His mother died shortly before he reached the age of two and he and his siblings were raised by their stepmother, Sadie Maynard.

“It was about 500 acres,” he said of the family homestead. “I learned to work in the fields at an early age, at four years old. They knew where to use us as boys.”

He recalls going to the mill every two weeks as part of his work.

And he spoke of his childhood and attending a one-room school, located a quarter mile from his home. He said he received one pair of shoes each year.

He recalled a favorite activity.

“The sun would come out and I would look and see it hit a big rock by the road,” he said. “I’d run to get over there, barefoot, and stand on the rock to get my feet warm. That’s just the way life was.”

Maynard and his wife, Eunice, who passed away in 1982, had six children, Barbara LeGates,  Bea Brewer, Delmas Maynard, Sylvia Kahl, Gail Purdue and Bruce Maynard, who range in age from 63 to 81 years old.

The family lived in Crown City and Maynard worked in the coal industry. He said the company sent him to school to learn the trade.

“That schooling was the greatest thing I ever did, and I’m thankful for the education I got,” he said.

Maynard focused on the electrical part of the mines, as they switched to DC current, following a deadly mine explosion in the region, which killed 90 people.

“DC current was less dangerous than AC/DC,” he said of the changeover.

He’s lived in Wayne County and McDowell County in West Virginia, and Florida.

Purdue said her father has traveled much, recalling a 1,000-mile, 20-day trip he took to Canada by train, where he visited Montreal and other locations.

Maynard has lived at the Wyngate for about four months. He has 10 grandchildren, and many great and great-great children. His second wife, Virginia, lives in Crown City.

With a life that has spanned the Great Depression, the World War II era and into the digital age, Maynard has seen a lot of changes in the world.

He said his first car was a 1934 Chevrolet and he remembers when his family bought their first radio.

“It was quite something to hear that noise coming out of it,” he said.

He said the first movies he remembers seeing in a theater were westerns, starring Tom Hicks and Ken Maynard, who were most popular in the 1920s and into the 1930s.

He remembers the serial that would play in front of the films, with a new installment of the story each week.

“They did that in order to get you to come back,” Maynard said.

Today, the entire family will gather at the senior living community in Rome Township to help him mark the birthday milestone.

Lively, sharp and conversational as he reaches 100, Maynard said he enjoys living there and often will sit in one of the facility’s gathering rooms.

“I can sit back and listen,” he said. “I know everyone’s voices. I can remember and, if I hear them talking, I always know who it is.”

Gail spoke of her father’s personality.

“He’s quite generous in the community and he’s done so much,” she said. “He always helps out people in need. He’s been blessed with a good Christian life.”

Maynard said he is very fond of his family and has always seen to it that they were taken care of.

As a member of Philadelphia Church in Lavalette, he also spoke of his Christian faith.

“The greatest thing that ever happened to me was being able to serve the Lord,” he said.

Gail said her father stayed healthy all these years by remaining active.

“He used to walk five miles a day,” she said, noting that he has survived open heart surgery and has been fitted with a pacemaker, remains in great health for his age.

He’s an Energizer Bunny,” Gail said of his longevity. “He keeps going.”