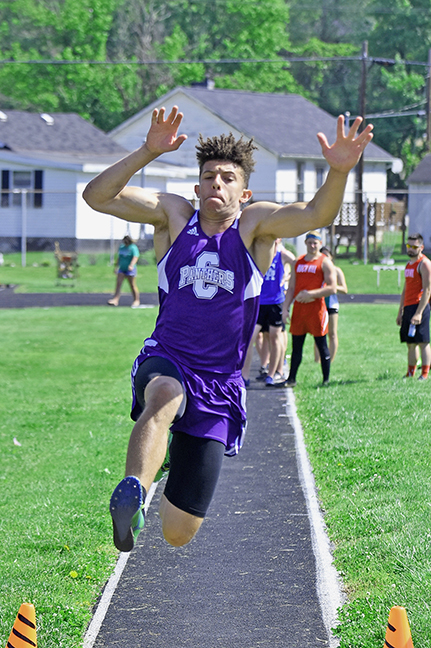 COLUMBUS — The third time wasn’t the charm, but it was still quite an accomplishment.
Chesapeake Panthers’ senior track standout Cecil Fletcher competed in his third state track meet on Friday, only this time it was in the long jump.
Fletcher finished 14th in the event with a leap of 20-feet, one-half inch.
Tre Tucker of Cuyahoga Valley Christian Academy won the event with a distance of 22-7.75.
The meet was held at Jesse Owens Memorial Stadium on the campus of Ohio State University.
Fletcher — who has signed with Ohio Wesleyan University — was fourth in the Southeast regional meet.
It was Fletcher’s third trip to the state track meet in four years. He qualified as a freshman and sophomore in the 400-meter dash. He missed almost all of last year due to an injury that caused him to start his season just prior to the postseason tournament.
As a freshman, Fletcher ran a 51.19 and did not qualify for the finals.
His sophomore season proved to be a drastic improvement as he ran a 49.3 seconds for the second fastest preliminary time. Fletcher then ran a 50.14 and was fourth in the finals.
Chesapeake’s Kelsie Hegemeyer competed in the Division III 1600-meter run at 10:05 a.m. on Saturday.

Cleveland Browns’ head coach Hue Jackson is all smiles after living up to his word to jump into Lake Erie... read more