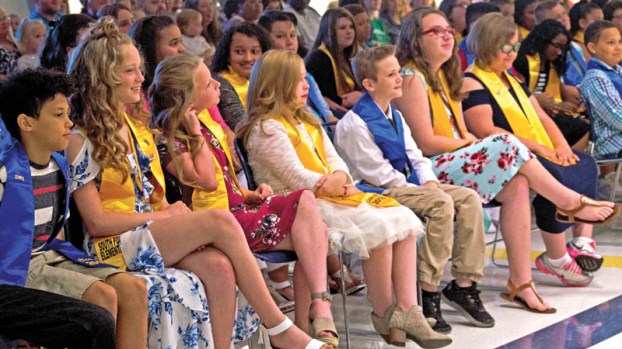 Members of South Point Elementary’s fifth grade graduating class listen to remarks from district superintendent Mark Christian during the school’s ceremony on May 25.

Graduation ceremonies took place at Burlington and South Point Elementary, giving teachers and faculty the opportunity to honor their students before they leave for South Point Middle School.

At Burlington Elementary, principal Michael Clay oversaw the ceremony, along with assistant principal Cassie Lunsford, wrapping up her first year at the school.

Parents and family watched as the choir of the fifth grade classes sang at the start of the event.

For many, it was an emotional moment, marking, in many ways, the end of childhood for the  students.

“Believe it or not, they are halfway through their 12 years of education,” Superintendent Mark Christian said. “They’re turning into teenagers before our eyes.”

“I want to thank the teachers and staff at Burlington for their hard work and their dedication to these students,” he said. “And to the parents and grandparents, thank you for giving your unconditional love and support. Without you, they would not be here today.”

Christian congratulated the students for reaching the end of elementary education.

“This is one good looking group of kids,” he said.

Students holding special roles in the ceremony included Ella Childers and Jasmyn Jones, who led the prayer, Jerry Long and Shyann Shepherd, who led the pledge of allegiance, and Austin Evans and Avery Leach, who conducted the benediction.

Presidential awards were handed to a number of students by Lunsford, while teacher Lara Leach presented plaques to those with straight As.

Following Burlington’s ceremony, Christian and board of education members quickly drove about 10 minutes away to South Point Elementary, where principal Chris Mathes and assistant principal Bill Christian were hosting graduation for 65 students who will join those at Burlington at the district’s middle school in the fall..

“We hope you have made many memories that you will take with you,” Mathes said.

He spoke of the early days of the children at the school, where they had to learn the basics, such as how to open a milk carton for lunch, as well the anxieties they may have felt on the first day of school and riding the bus.

But Mathes said this all culminated on May 26, 2018, a day that “will be forever remembered in history.”

He was referring to the Field Day the school hosted against Burlington, in which South Point had won back the tug of war trophy in the final match between the fifth grade classes. He proudly hoisted the trophy multiple times during the ceremony, giving the crowd a chance to savor the victory.

“This class has been a pleasure,” Bill Christian said. “This is a really great group of kids. They have a lot of heart.”