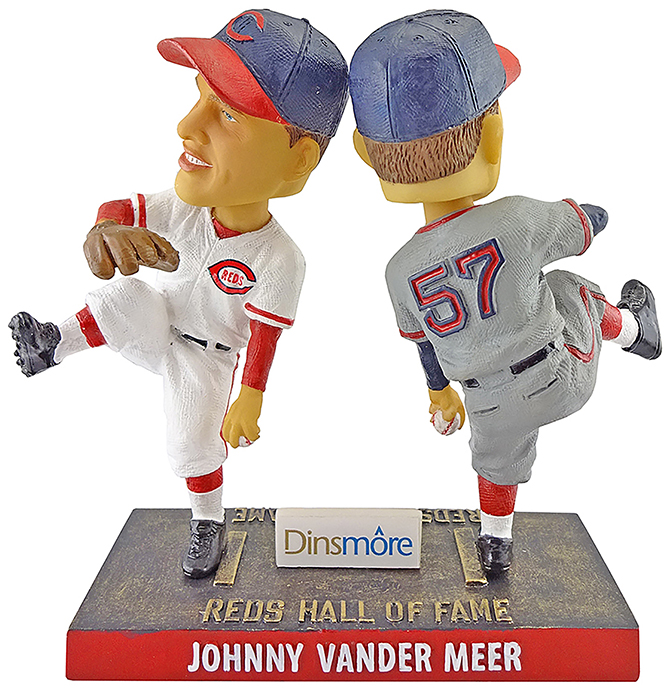 CINCINNATI — The Reds Hall of Fame & Museum presented by Dinsmore continues its 2018 bobblehead program in June, celebrating the two consecutive no-hitters thrown by Reds Hall of Famer Johnny Vander Meer in 1938.
This double bobblehead features Vander Meer in both his home and away uniforms and symbolizes the incredible feats accomplished on June 11, 1938, at Crosley Field vs. the Boston Bees and four days later on June 15 vs. the Brooklyn Dodgers at Ebbets Field.
A four-time All-Star, Vander Meer boasted a 3.41 ERA over the course of his 11 seasons with the Reds while amassing 1,251 strikeouts.
He also remains the only pitcher in Major League Baseball history to throw back-to-back no hitters, considered an “unbreakable” record.
He was inducted into the Reds Hall of Fame in its inaugural class in 1958.
The bobbleheads are free with regular-price admission to the Reds Hall of Fame and Museum (or a Great American Ball Park tour) beginning Friday, June 1 at 10 a.m., and will be available Fridays, Saturdays, and Sundays throughout the month of June, while supplies last.
Only 6,000 bobbleheads have been produced and there is a limit of one bobblehead per visitor per day.
The bobblehead series continues through September with a different Reds Hall of Famer available each month:
• April: Chris Sabo (available only with museum membership)
• May: Ernie Lombardi (available only with museum membership)
• June: Johnny Vander Meer
• July: Adam Dunn
• August: Tom Browning
• September: Johnny Bench
Admission to the Reds Hall of Fame and Museum is $10 for adults, $8 for students/seniors, and $6 for active military/veterans. Children four and younger are free.
The best way to ensure a bobblehead is to join the museum as a member. To become a member, please visit RedsMuseum.org for more information or call (513) 765-7926.
About the Reds Hall of Fame & Museum presented by Dinsmore
Driven by a mission to celebrate greatness, preserve history and provide inspiration, the Reds Hall of Fame & Museum at Great American Ball Park is the place where the story of Reds baseball comes alive each day.
The Museum features 16,000 square feet of historical, interactive and educational exhibits, highlighting the rich and storied tradition of the Reds for fans of all ages.
Since its inception, 86 players, managers and executives have been honored with induction. Plan your visit at RedsMuseum.org.