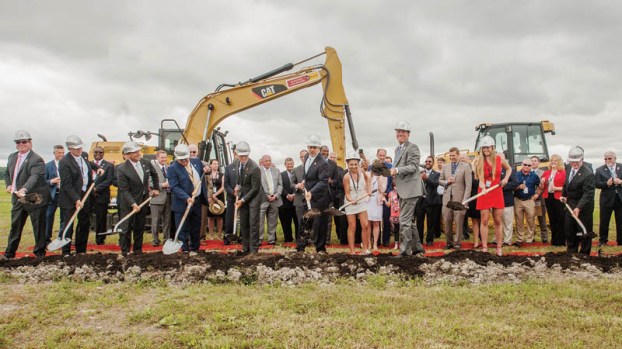 GREENUP, Kentucky — On Friday afternoon under overcast skies, officials from two counties, business owners and the Kentucky Gov. Matt Bevin broke ground on a 45-acre site that will one day be the Braidy Industries aluminum mill.

Greenup County Judge Executive Bobby Carpenter said he had been waiting for a day like that for a long time and said he didn’t even know if he could explain how he felt.

“This is something we waited 24 years on, to get something like this,” he said. “This is just what Greenup County, Boyd County and northeastern Kentucky needs. I think it is an answer to some of the things we have lost. It is the greatest feeling I have had in awhile.”

The $1.3 billion plant is going to be built in the EastPark Industrial Center, off of the Industrial Parkway. By the time the plant is finished in three years, 45 acres of factory will be under one roof and the mill will be producing nearly 300,000 tons of milled aluminum for use in the automotive, airline, and defense industries. Construction of the mill will take two and a half years for the first phase and another year and a half for phase 2.

Braidy Industries CEO and Chairman Craig Bouchard thanked many people for helping to bring this plant to fruition.

“It is going to take all of us to make this the huge success we have the potential to create,” he said, adding that the company is partnering with the Ashland Community and Technical College for a two-year degree that, as long as the graduates pass with “at least B’s and drug-free every step of the way,” they will get jobs in the mill. The state board of regents recently accredited the program.

Bouchard said that the company will be a friend to the community, as was evidenced by a Family First celebration that the company sponsored in downtown Ashland, Kentucky, which featured free music by Tanya Tucker and other musicians.

“We need everyone on our team,” he said.

The construction of the mill will employ about 1,800 people. Once it is completed, the company will employ about 600 people in a high tech environment with robots and artificial technology in a factory with $580 million of new equipment.

“Our mission is not to make aluminum, our mission is to rebuild northeast Kentucky,” Bouchard said. “And rebuild all parts of Appalachia and Kentucky with advanced technology.”

Gov. Bevin said it was a great day to be in Kentucky to the cheers of the 1,000 or so people in the crowd.

He said that this new plant was just the beginning.

“We have an abundance of things here, including a workforce that is hungry to work,” he said. “So it easy to sell it (to other businesses.)”

Bevin added that it was the area’s pride, sense of family and sense of community that attracted Braidy Industry to Greenup, Kentucky.

“You sold Craig Bouchard on this, you sold his team on this,” he said, adding that it was okay that they would attract workers from across the Ohio River and the region. “This whole community is now going to be the heartbeat of the vision to make Kentucky the absolute epicenter of engineering and manufacturing excellence in America. It will happen, it is already underway.”

Carpenter said that this is the type of economic development officials try to do “so your kids will stay here. I think this is a stepping stone.”

He said there is 200,000 acres of land in Greenup County that could be used for factories. Braidy Industries recently bought two buildings in EastPark for their business and has a total of 240 acres of land there. One building will house its subsidiary, Veloxint, a MIT-incubated company that created a process to strengthen aluminum. The other building will house the mill’s metallurgical team.

“I think everything is going to work out,” Carpenter said. “This is just a great, great day.”