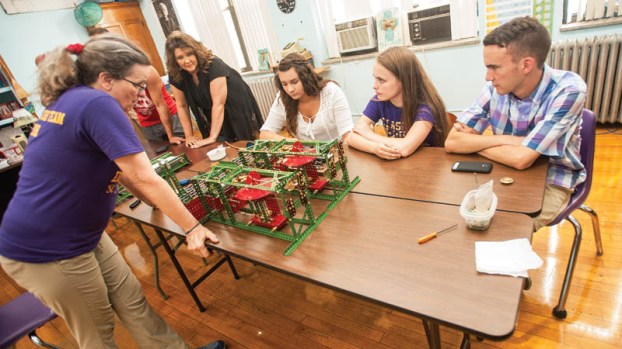 The complex machine is built with the gears, rods, and metal plates from Meccano parts, toys that are more familiar to Americans as an Erector Set.

The class has been working with Dr. Bonita Lawrence from Marshall University’s Mathematics Department.

She saw the original differential analyzer in the London Museum of Science and became fascinated with it. She built her own version of it with a mentor from California. In turn, she agreed to mentor the St. Joseph students to build one, a first for her and the students.

The class started building it in October and finished it last Thursday.

“We are doing the final tune up to get it running smoothly,” she said.

Lawrence said there was a little bit of delay because she had what she described as a “cancer scare” and had to undergo several chemotherapy treatments which left her too tired to work.

She took medical leave from Marshall.

“The only thing I continued on with was working with these students,” she said.

Now that the machine is completed, it belongs to the AP calculus class.

“This is the first high school in the country with its own differential analyzer,” Lawrence said.

And the eight students in the class did work on it.

Lawrence just supplied the parts, advice and pictures. She said she felt that bright students are too often just given instructions and told what to do.

In this case, she brought over one of her already built integrators and “put it on the table and said ‘build this.’ And they did it.” Then the process was repeated with other parts of the analyzer until it was completed.

“The kids have been so involved in it and they were so excited,” she said. “They took screws, bolts and rods and put it all together. And it is actually going to solve a differential equation.”

Ryan Scaife said the project could be accomplished, but they didn’t think it was going to be so much of a challenge.

“We started off from scratch. Since we are high school students, you wouldn’t think it would turn out as well as it did,” he said. “We got scratches and bumps. And it was a lot of trial and error.”

He said it was a great application of the math they learned.

“This is what you are going to use math for, to do stuff like this,” Scaife said. “It is very complicated and I don’t feel like I fully understand it, but what we have been learning all comes together.”

Johnson said that differential equations are concepts that are barely touched on in high school, normally that is something students see in college.

“I think know they understand how we are doing derivatives, by talking about the input and output that you are going to see on the table,” she said. “It was amazing watching them put this together.”