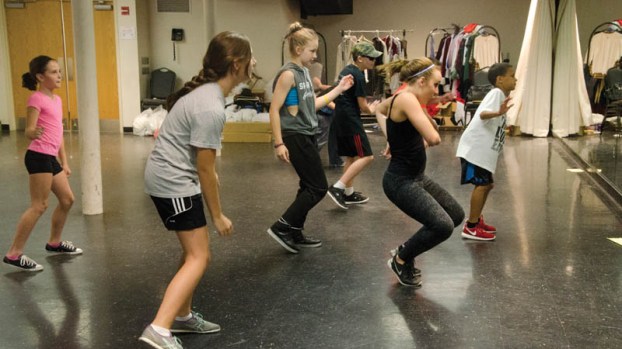 Students practice a dance routine at the The Paramount Arts Center’s summer camp.

Paramount to have arts camps

ASHLAND — School may be out, but there is a major opportunity for students to learn about the arts in the coming weeks.

The Paramount Arts Center, located on Winchester Avenue in Ashland, will be offering its annual summer camps, beginning June 18.

Included in the sessions are courses in drawing, theater, dance and more.

Joshua Jannotta, with the Paramount, said there is no deadline to sign up for the camps and they are open to all ages under 18.

In addition to the individual sessions, the highlight of the camps will be the two-week summer production camp, which gives those enrolled the chance to take part in a theater effort, from auditions, all the way to final performance.

This year, the camp’s production will be “The Addams Family,” the musical based on cartoonist Charles Addams’ macabre characters. The show is set for July 20 at 7 p.m.

Jannotta said no experience is necessary to participate.

“It’s good for beginners,” he said. “They learn everything to do with theater. It’s a great learning experience.”

For more information on the camps, visit paramountartscenter.com/learn-at-the-pac/ or call 606-324-0077.

In addition to the camps, the Paramount has several events lined up for summer.

Isaac Stephens and Friends have a show at the theater on Friday. Tyler Childers, an eastern Kentucky native getting national attention in the music scene, will perform on June 23.

The Buffalo Ridge Jazz band are scheduled for a show on July 14 and Bret Michaels, the lead singer of 1980s hair metal band Poison, is scheduled to perform on July 26.