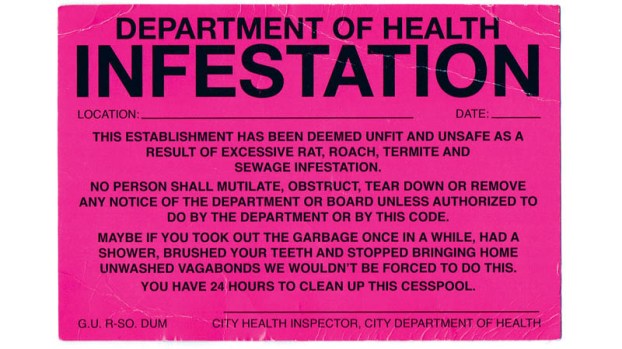 Fake inspection tags are not from Ironton Health Department

Calls came into the Ironton Health Department from concerned Ironton residents because they found a sticker that said their home had been deemed “unfit and unsafe” because of vermin.

Panicked, they called the Ironton Health Department since the sticker claimed to be from a city health inspector.

The thing is that it wasn’t real.

“I think it’s a joke,” said Laura Brown, the director of the Ironton Health Department, adding that it was definitely not from her agency. “It is not an official document. I think it is terrible and disgusting that someone would do this kind of stuff.”

The bright pink sticker reads in bold, black letters that it is from the “Department of Health” and that there is an “Infestation.” The body of the sticker reads in a quasi-official style “This establishment has been deemed unfit and unsafe as a result of excessive rat, roach, termite and sewage infestation. No person shall mutilate, obstruct, tear down or remove any notice of the department or board unless authorized to do by the department or this code.”

The “notice” gets nasty in the final paragraph: “Maybe if you took out the garbage once in awhile, had a shower, brushed your teeth and stopped bringing home unwashed vagabonds we wouldn’t be forced to do this. You have 24 hours to clean up this cesspool.”

In the bottom left corner is the part that gives away that it is supposed to be a joke with the letters “G.U. R-SO. DUM,” which, when read aloud, says, “Gee, you are so dumb.”

Brown said a second call came in of another house tagged with the same sticker “not on the same block, in a different area of town.”

She added the victims of the prank are older citizens who couldn’t see “G.U. R-SO. DUM.”

“It made them so anxious until I assured them that it wasn’t us,” Brown said. “I only have reports on two, but two are too many. One is too many.”

Brown said that when the health department does have an issue with garbage or vermin, the homeowner gets an official letter and try to talk to them face to face.

“We would never put anything like that on their door,” she said, adding the only time they put a sticker on house is if it has been condemned and that is only after the issue has gone through the board of health and it cites specific city codes.

“Really, this is just awful and not funny,” Brown said.

Employers take part in job fair to find workers to fill positions Jobseekers got a chance to meet with 18... read more