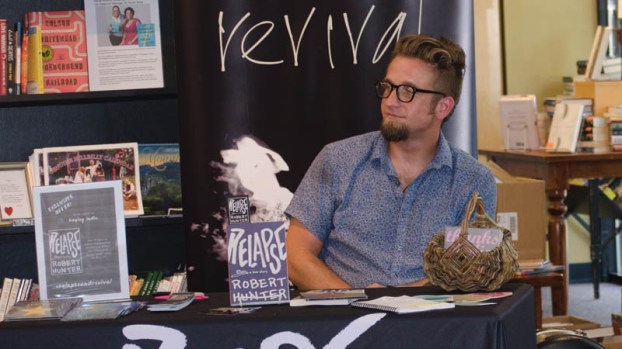 Author Robert Hunter signs copies of his book, “Relapse: A Love Story” at Empire Books in Huntington on Saturday.

HUNTINGTON — Becky Hunter was standing in Pullman Square on Saturday, greeting passersby and sharing her story.

She was diagnosed with cancer in 2016, and following surgeries and a double mastectomy has been cancer-free since December.

Her battle with the illness inspired her husband, songwriter and author Robert Hunter, of Nashville, in his work.

He describes his latest book, “Relapse” A Love story,” as a humorous, satirical look at love. He was signing and promoting his work during an appearance at Empire Books.

He said the book’s main character, whom he describes as his alter ego, faces a similar situation.

Robert said he had started the story before his wife’s diagnosis, but when the couple learned the news, they had to make tough decisions.

He said he asked Becky “What do you want?” and she told him to finish the book, get it published and to share the story with everyone.

Robert said he had started with a 3,500-word manuscript, which doubled after he made the commitment to his wife.

“I wanted to create a fictional world that would make us laugh,” he said.

The two have been hitting the road in an RV on a nationwide tour, telling their story.

They have been accompanied on the tour by musician Sarah Trunzo, who played at Empire while Robert was signing.

He is also a published recording artist and had copies of his latest album, “Revival” on hand.

Robert said, wanting to support small businesses, they had made the album available to local record shops before selling it through major online retailers.

He thanked Trunzo, his wife and the team for supporting him.

“This all revolves around Becky,” he said. “Without her, I wouldn’t be here.”

For more information on Hunter’s work and the tour, visit www.relapseandrevival.com.

A culvert replacement project on State Route 243 has been completed, and the route is now open to traffic in... read more