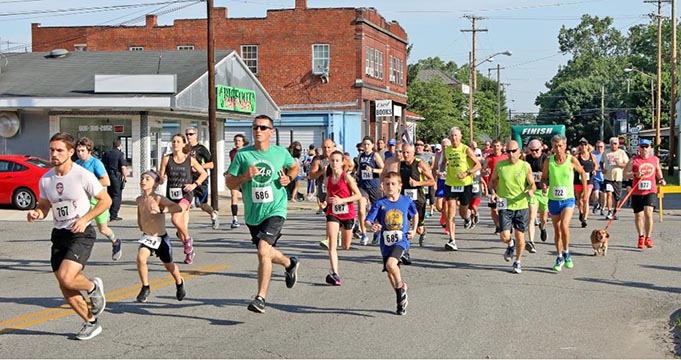 Runners take off at the starting line for the 41st annual Run By The River held Saturday in Russell, Ky. (Photo Courtesy of Tim Gearhart)

Tim Gearhart
For The Ironton Tribune

RUSSELL, Ky. — It was hot.
That was the general consensus among the winners of Saturday’s 41st annual Run By The River, sponsored by the Kiwanis Club of East Greenup County.
Scott Hamm of South Point and Kara Coldiron of Greenup were the men’s and women’s winners of the 5K race while Jeff England of Ashland and Denise Beegan of Greenup took home the trophies in the 10K.
“It was nice to have the water stations every mile,” England said. “I didn’t drink a lot of it, but poured it over my head.”
The temperature at the start of the race was 75 and warmed up into the 80s under sunny skies.
Coldiron, 20, agreed it was “kind of hot,” but said she was happy with her time.
“This is the first 5K I’ve run in over a year,” she said. “I’ve been running marathons and half-marathons.”
Coldiron, whose sister Katie won the 10K in 2012, ran the course in 20:34, the best women’s time since 2013 when Missy Taylor completed it in 20:39.
Coldiron just earned her bachelor’s degree at UK and will be going back this fall to start work on a master’s degree in nutrition and dieting. She then plans to earn a PHD and teach at the college level.
Hamm, 37, an 8th grade teacher at Dawson-Bryant Middle School, turned in a time of 18:40 on the 5K course. That was the best time in the men’s division since 2013 when Aaron Stevens ran the course in 17:16.
In winning the 10K, England, a retired engineer from Marathon Petroleum, found a way to not only claim the top trophy but to put almost enough change in his pocket for a small coffee.
Along the route to Worthington he spotted coins on the highway. On the way back, he stopped to picked it up. “I looked back and saw I was far enough ahead to pick up the coins.”
At 55, England’s retirement didn’t last long. He’s started doing contract work for Marathon and just returned from Houston. “But I still have a lot of time now for runs,” he said.
Run By The River used to run underneath the old Ironton-Russell Bridge and England said he would like to see the race either go underneath the new bridge or across it and back.
In the women’s 10K Beegan posted a time of 49:58.
“I ran with Missy Moore. She was pacing herself today to prepare for a race tomorrow (Sunday), so she’s really the winner of this race,” Beegan said.
As a physical therapist in Lawrence County, Beegan said she enjoys inspiring others to lead a healthy lifestyle, which includes running.
“I believe in exercise and I think that leads to a healthy life,” she said. “I enjoy inspiring someone else to eat healthier and exercise. It makes you feel better.”
The Hamm family swept the father/daughter, father/son, mother/daughter and mother/son categories. Scott Hamm and his wife Katie, 37, paired with both their son, Seth, 9, and daughter Laura, 12, to win the four first place trophies.
Bonnie Spears, 61, of Worthington won the Stroller division, pushing her new grandbaby around the course.
Chris Griffith, 44, of Ashland won the Top Dog trophy for the second year in a row with a 5K time of 25:09. Brian Hancock, 63, of Ashland, come in 2nd with a time of 59:20.
The oldest participant was Leo McMillen of Lexington. At 81, he completed the 5K in 45:51. The youngest runner was Ealynn Virgin, 6, who ran with her father Tyler Virgin. They are from Kitts Hill, Ohio. Ealynn’s time was 40:25.
Ron Simpson, 63, of Russell, and Randall Norris, 61, of Columbus were in Saturday’s 5K. Both ran in the first Run By The River 41 years ago.
Over that 41 years, Simpson has missed only a handful of races. He finished 10th overall in the 5K and had a time of 22:54.
Norris said he enjoys coming back home and running in the event. He placed 17th overall in the 5K and posted a time of 25:59.
This year’s event attracted 109, with 70 completing the 5K, 27 in the 10K and 7 walkers.
Proceeds from the race, which should total about $4,000, will be used by the East Greenup Kiwanis Club for scholarships, grants to the 3 local school systems to be used by their family resource centers, Shop with a Cop, the library’s summer reading program and food baskets at Thanksgiving.