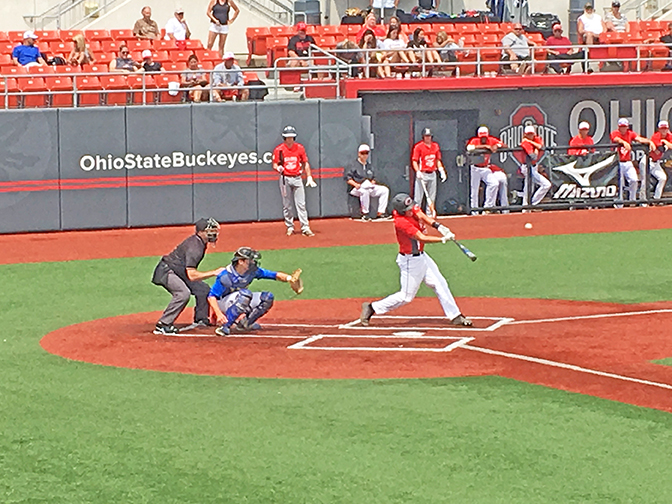 COLUMBUS — Jeb Jones was among the elite.
Playing in the Mizuno All-Ohio Baseball Series, the Coal Grove Hornets senior catcher and first baseman played well against the four talent-laden teams who were selected to play this past week at Ohio State University.
Among the four teams were 20 Division I recruits including four headed to Ohio State.
Jones’ Red team was unbeaten in its three games. He was 3-for-5 with two doubles, two runs batted in and two runs scored for the two-day event.
“He had a really good showing. I’m proud of him,” said Hornets’ coach Dean Mader.
On Thursday, Jones was 0-1 in the first game as he was the catcher for three innings.
In the second game, Jones played four innings at first base and singled to drive in Wright State recruit Tristan Haute with the winning run as his team won 5-4.
The hit came against Evan Lacey of Akron Firelands who has signed with Ohio Dominican.
On Friday, Jones was 2-for-2 with a double and an RBI as he played catcher in an 14-5 win.
Jones’ second double came off Josh Dentinger of Buckeye Central and scored Preston Disnigule who is headed to Connor State.
The Hornets’ Daniel Rutherford played in the All-Star Series last year. He went 3-for-6 in his three games.

On Friday morning, the owner and operator of the Gem City Allstars was arrested by the Ironton Police Department on... read more