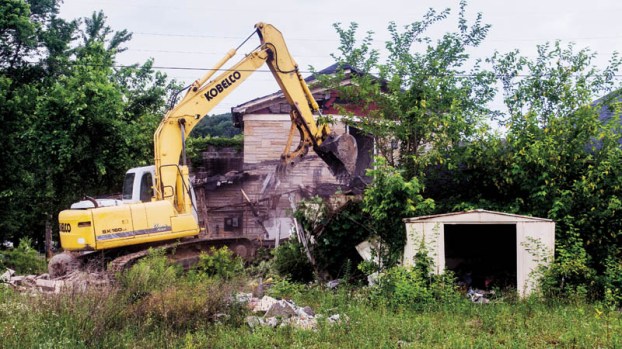 Crews begin the demolition of the former Pulley Nursing Home in South Point Monday. This marks the 100th structure demolished as part of the Lawrence County Land Bank.

BURLINGTON — Pulley Nursing Home has been vacant for more than a decade, its windows covered and its façade overgrown with Virginia creeper vines.

“It’s an eyesore to Burlington,” Simon Gore, who lives next door, said. “I’ve lived here 51 years. I’ve seen it in its heyday and I’ve seen it abandoned.”

Gore said the building, as well as a nearby abandoned home, have been a magnet in drawing “critters” to the neighborhood.

“Every night, there’s a raccoon in my yard,” he said.

On Monday, he and residents of the neighborhood saw the first steps toward the end of their problem.

The Lawrence County Land Bank began demolition on the structure, its 100th in the county to date.

A group of local officials, such as Lawrence County commissioners Bill Pratt and DeAnna Holliday, County Clerk of Courts Mike Patterson, South Point Mayor Jeff Gaskin and Ironton Mayor Katrina Keith were on hand to watch the backhoe move in and begin knocking down the former nursing home.

Burcham said the event was important to show that the land bank can work on commercial properties.

He said they are talking to developers about possibilities for the site, such as senior living apartments.

“Our options are open,” he said, stating the site would be brought up to construction grade. “We’re pulling up the gravel and blacktop and will fill it in.”

Burcham said the knockdown would take several days, followed by the repurposing of the site.

Gore said he was glad to see the building go.

“Oh, yes!’ he said, adding that it would be a benefit to the neighborhood. “This is a growing community.”

He said the nearby abandoned house is on the land bank’s list for demolition.

The land bank acquired the property at a Board of Revision hearing in 2017. The agency is charged with identifying and addressing properties in the county which are abandoned and tax delinquent. The properties are then repurposed and sold to private entities or regifted to local governments.

Burcham said the land bank had a lot of assistance in this particular project, and thanked County Prosecutor Brigham Anderson for helping to get the project started.

In addition to the land bank’s $30,000 for the project, they were able to raise funds for the demolition, with help from the commissioners, who earmarked $45,000 for asbestos removal, Patterson, whose office contributed $20,000 and Harriet Ramsey, the land bank’s South Point fundraising chair, who helped involve the community through donations, as well as Simon and Christina Gore.

Four businesses get award for support

Four Coal Grove businesses have been honored by a state education group for their support of the Dawson-Bryant schools. The... read more