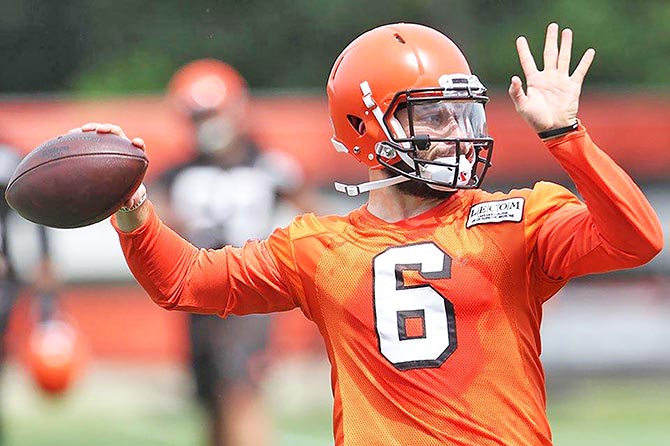 Cleveland Browns’ top draft pick Baker Mayfield gets ready to throw a pass during the team’s minicamp. Mayfield — who was the overall No. 1 selection in the NFL draft — is working behind Tyrod Taylor on the depth chart. (Photo Courtesy of The Cleveland Browns.com)

BEREA, Ohio (AP) — Baker Mayfield stood 15 yards away from a semicircle of cameras with a member of Cleveland’s media relations staff as Browns starting quarterback Tyrod Taylor was peppered with questions.
Mayfield held his ground and waited his turn in line.
For now, this is life for the No. 1 overall draft pick — and the No. 2 QB in Cleveland.
Along with learning a new playbook, offensive system, football-obsessed city and everything else that comes with being a rookie, Mayfield is getting a crash course in patience in the initial stages of his NFL career.
He’s a backup, and unless there’s a dramatic change over the next two months, it will likely be Mayfield’s role this season for the Browns.
“I’m not worried about it,” Mayfield said when asked if he felt like a backup. “I’m just trying to get better every day. We’re still early in June, this is just the second minicamp day and so I’m not worried about that now.”
This is new, and yet not unfamiliar territory for Mayfield, who went from being a walk-on at Oklahoma to a gun-slinging, trash-talking Heisman Trophy winner last season.
The Browns drafted him first to be their long-term starter, their franchise QB, their franchise’s face. But right now, Mayfield is slotted behind Taylor, who took Buffalo to the playoffs last season and has been so impressive during his first few months in Cleveland.
Mayfield is not only accepting his role, but he’s modeling himself after Taylor. It’s easy now because the season seems far away and each day brings a new challenge to overcome.
But when training camp rolls around next month, Mayfield knows it’s going to be much harder to accept that he’s not the one taking snaps with Cleveland’s starters.
“It’s human nature,” Mayfield said. “Yeah, you want to play, but I wasn’t brought here to just start. I was brought here to help turn this thing around and whatever my role is that’s what I need to do — whether that’s playing scout team or being the best backup possible or playing. So for me, I’m not worried about that. I need to be prepared for when I do get my shot to be ready to play, but other than that I just gotta continue getting better and improving this team as well.”
Mayfield believes he’s made significant strides since rookie minicamp. With each practice, he senses the game slowing down. He’s getting more confident in the pocket. He’s seeing the field. He’s deciphering complicated defenses.
He’s better, but Mayfield is far from being a finished product.
“Human nature, especially for me, I want to have it all figured out all right now, but that is just not how it works,” he said. “It is about realizing that we are going to have to take baby steps right now to get to where I want to go. You do not build a great castle all at once. You have to build it block by block. For me, that is how I need to handle it.”
Taylor does, too. He was once in Mayfield’s shoes, sitting behind Joe Flacco in Baltimore. He also knows how quickly things can change after being benched last season by the Bills despite having them in the playoff race.
Taylor has been impressed with Mayfield’s thirst to improve.
“He is asking questions,” Taylor said. “He is trying to learn the playbook, as well as everyone else is. He is competing. He is a rookie. He is trying to gain as much knowledge as possible.”
Mayfield’s getting some major help from veteran quarterback Drew Stanton, who is serving as a mentor/tutor for the 23-year-old.
It’s a role the 34-year-old Stanton has performed and excelled at previously while working with Matthew Stafford and Carson Palmer, both former top overall picks.
Like Taylor, Stanton feels Mayfield has all the intangibles to succeed.
“He has a great mindset,” Stanton said. “Just coming in here, wanting to work and get better and learn how to do all those things. He’s asking questions that are relevant. He’s engaged and he’s doing it the right way, so I think it’s a relationship that will continue to progress over a period of time. It’s not just something you build overnight, but he has all those tools that you’re excited about. Obviously, there’s a reason why he was drafted No. 1 overall.”

CINCINNATI (AP) — During the first day of Bengals minicamp, the offense ran through new plays. A day later, some... read more