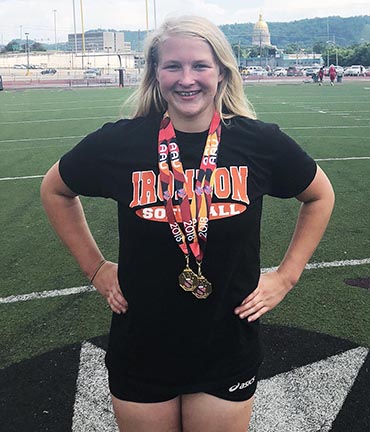 Emma Hall is rising to heights that rival how far she can throw.
The Ironton Middle School eighth grader has thrown the discus as far as 101-feet, 8-inches which has vaulted her into the AAU regional track meet.
Hall — who is just 13 — won both the shot put and discus in the AAU district meet held in Charleston, W.Va.
Besides her throw of 101-8 in the discus, she heaved the shot put 32-feet, six-inches.
The discus throw currently ranks her in the top 10 for the AAU regional national qualifying meet in Grove City, Ohio, on June 28.
If Hall finishes in the top five in the regional meet, she will advance to the AAU National Junior Olympic Games on July 28 in Des Moines, Iowa.
Considered intense with a relentless work ethic, Hall set the Ironton Middle School record in the discus this past season.
Her performance this past season earned her a trip to the middle school state meet where she would have placed fourth but fouled on her best throw.