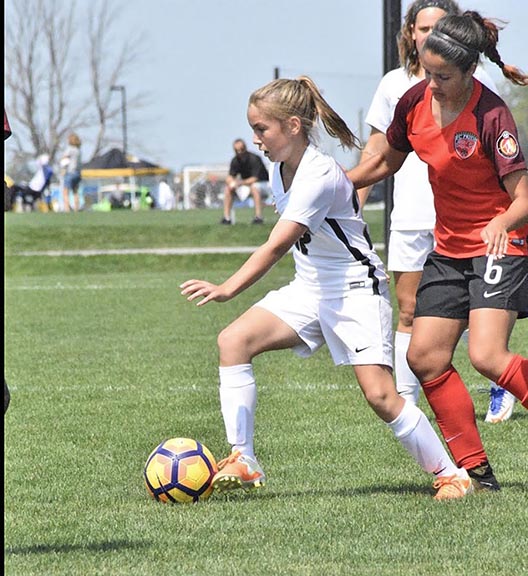 There was a TV show from 1968-70 called “Here Come The Brides” and the theme song had the line, “The bluest skies you’ve ever seen are in Seattle.”
Evan Williams is hoping those blue skies bring good times as she prepares for the ECNL national championship tournament starting June 21 in Seattle.
Williams — who will be in the eighth grade at the Ironton Middle School — will be part of the tournament as her Columbus area-based soccer team climbs on a plane and heads for Seattle on June 20.
“I’m nervous. It’s more pressure than the other games,” said the 13-year-old Williams.
Williams plays on the Ohio Premier which is based in Dublin but draws players throughout the state. The team is part of the Elite Club Nationals League which is considered the top girls’ club teams.
“It’s a good experience. Meet a lot of players from different,” said Williams. “But the other girls get to practice a lot more because I have to travel two hours to practice.”
Players in the league were born in the 2004 year. The team plays in a league that competes against teams in Indiana, Tennessee, New York, Pennsylvania, Virginia and South Carolina and Maryland.
She played in the soccer showcase in New Jersey over the Memorial Day weekend.
“I play midfield and set people up for goal,” said Williams.
This is the first year the team has been eligible to qualify for the nationals. Players must try out for a team every year. The team selects 20 players out of approximately 150 candidates.
Williams began playing in the league at the age of nine, but she plays other sports as well including basketball, volleyball and track.
Volleyball, basketball and track.
“I like soccer and basketball. They’re similar,” said Williams.