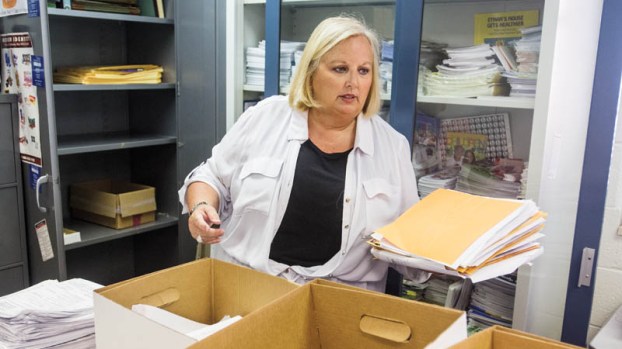 Director Laura Jean Brown clears out her office on her last day of work for the City of Ironton Health Department.

Department had been open for 142 years

At 4 p.m. Friday, the Ironton City Health Department closed its doors after 142 years.

On May 10, the Ironton City Council voted unanimously to merge the department with the Lawrence County Health Department for financial reasons and after two state agencies said that the city health department would not get the state accreditation it needed to stay open.

Two weeks ago, the city took away the health department’s vehicles and on Friday afternoon, director Laura Brown was boxing up medical files and cleaning out the half of the building the department shares with its county counterparts.

“I’m sad to see it going and I hate to see it go,” she said. “But I do understand that with the decline in public funding, between the state, federal and local, that it would be easier to support one health department rather than two. I am supporting the county health department.”

The county health department will be taking over all the services, except for the “weeds and seeds” aspect, which will be through the mayor’s office when there is an issue with overgrown lawns, debris, appliances and similar issues.

Brown had been with the city health department since 2010.

“I have no hard feelings toward anyone. I just want everyone to know, I think I have done a good job despite what anyone says. I have been a good steward of the public’s money and I feel like I have been a good health commissioner. I thank the citizens for giving me the option of being a health director.”

Brown said that when the Ironton City Health Department was started in 1876, the city had a big population and there was a demand for the services.

“You couldn’t have livestock running around downtown and leaving feces everywhere. People would get sick,” she said. The county health department was started three decades later. “I hate that we are losing the city health department, but unless things change in the city, with it’s population, the city is going to continue to lose funding.”

She said she supports the county health department because “public health is very important.

Public health is always your first option for people to go to. If there is an outbreak, like with hepatitis A, everybody comes to the health department. Your health department is on it quicker than a doctor or a pharmacist.”

She said that Ironton isn’t the first city and county to combine health departments, citing recent mergers in Marietta and Athens.

She said the health departments also do childhood immunizations for those without insurance or those whose insurance doesn’t cover it. They also do prenatal clinics, family planning sessions, animal bites and making sure that restaurants are clean.

Brown graduated from nursing school in 1979 and began her career at Lawrence General Hospital’s emergency room and ICU. She then went to Our Lady of Bellefonte Hospital’s ER/OR as a nursing supervisor for 10 years before going to St. Mary’s Medical Center in its open heart surgery recovery center for 12 years. She then became a traveling nurse for a while, but didn’t like being away from her family. She then went to King’s Daughters Medical Center for eight years before joining the Ironton City Health Department.

“I did flu vaccines for one season and discovered that I like the public,” Brown said. “That’s why I came on full-time here.”

As for her future plans, she joked that she told her husband that she was going to become a “kept woman.”

“He just laughs at that. I have always worked,” Brown said. “Actually, I am going to turn 62 in October so I am going to retire on Social Security.”

She added that she only has nine years in the Ohio Public Employees Retirement System and members need 10 years to get their retirement through that plan.

Brown said she has enjoyed her time at the health department.

“This job is a great job,” she said. “I do not like the politics of it, politics should not be part of public health. But in Ironton that is a problem. It’s been a problem for years.”