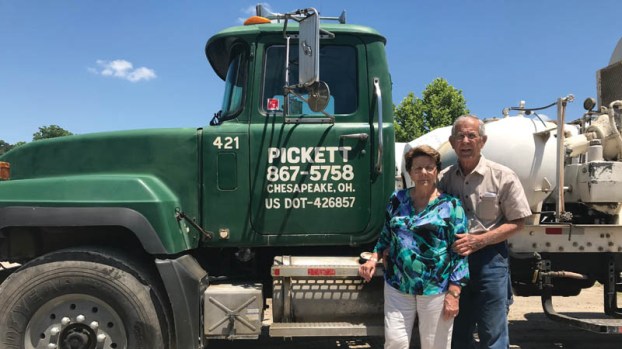 John Galloway, of Big G Incorporated, with his wife, Mary Ann Galloway. He began the company in 1990 with his sons, Todd and Jim. It remains locally owned and operated in Chesapeake.

Concrete company has been serving customers for nearly three decades

“We are successful because of our faithful customers and employees,” Mary Ann Galloway said.

Pickett Concrete was the first of the businesses to start.

Within three months of the Galloways purchasing the existing Pickett Concrete and repairing the plant, the first pour was made on Mother’s Day. Starting Big G Incorporated was “the perfect storm.”

“I was within three years of retiring at AK Steel,” John said. “If I would’ve thought about it, I might not have done it.”

John and his two sons started the operations of Big G Incorporated out of Chesapeake, but it has since expanded to Coal Grove, Proctorville, Ironton and Morehead, Kentucky.

“The product is unique. It has to be made local,” John said. “It is one of the only products you can have that is all-American.”

Being locally owned and operated for 28 years, Big G Inc. has many repeat customers because of its “level of personal service and better product.”

Big G Inc. has 40 employees between its operations.

“Not only are they working for us, but they are helping others,” John said.
Along with Pickett Concrete, Premier Precast Products focuses on underground utilities including sewer drains, catch basins and more.

“If it’s underground, it’s us,” plant manager Evyan Terry said. “If we don’t have the molds, we will have them made or make them ourselves.”

Premier Precast Products began in 2008 and is certified by the National Precast Concrete Association.

All three businesses in Big G Incorporated “work together to succeed.”

Earlier this year, a void was left in the company with the untimely passing of Todd Galloway. Big G Inc. works to remain true to the founding values that Todd created within the company along with his father and brother, his family said.