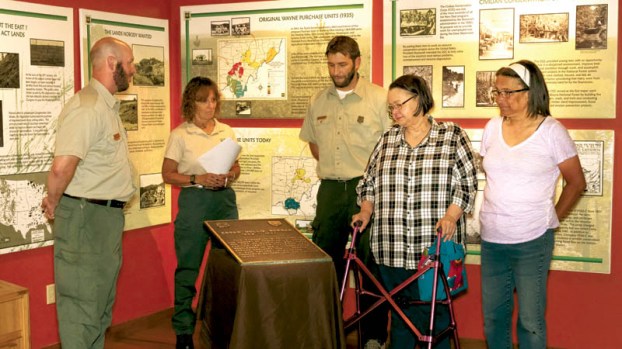 Wayne National Forest Service employees Camden Bumpus, Lori Swiderski, and Dan Anerino presented the daughters of the late Edgar Hollis Norman, Vicky Norman and Sandra Carnahan, with a plaque that honored Norman that was once on the former Vesuvius Job Corps Conservation Center.

NELSONVILLE — The Wayne National Forest has given a long-forgotten plaque to the family a man who helped build Lake Vesuvius into what it is today.

The plaque had been in storage for three decades and was rediscovered by a WNF fire captain who was determined to find the family of the the late Edgar Hollis Norman and give it to them.

Last Wednesday, during a ceremony at WNF headquarters in Nelsonville, Norman’s daughters, Vicky Norman and Sandra Carnahan of Columbus, were on hand to get a plaque that once adorned the former Vesuvius Job Corps Conservation Center, located on the Ironton Ranger District.

Norman was employed by the Forest Service in the 1960s and lead the work on the center.

“It’s very gratifying,” stated Vicky Norman. “I’m so proud that so many people thought so highly of my father.”

The plaque is believed to have been displayed at the center’s gymnasium in memory of Norman, who died on March 20, 1967.

It is thought that the plaque was removed from that location after the Forest Service transferred the property to new owners in 1987.

The plaque states that Mr. Norman was vitally interested in natural resources, along with our country’s welfare and the nation’s youth. He served in the U.S. Army during World War II.

Records indicate the Job Corps workers constructed the amphitheater near the former Interpretive Center located in the Lake Vesuvius Recreation Area. They also built the Big Bend Beach area, and reconstructed much of the trail system on the Ironton Ranger District.

The plaque would have probably continued to gather dust if it had not been for the persistence of Forest Service Fire Engine Captain Camden Bumpus.

“I found the plaque last October in one of our warehouses. It weighs about 50 pounds and measures 18 inches wide by 27 ½ inches tall,” said Bumpus. “To help locate the family, I sifted through genealogical records at libraries in Ironton and Ashland, Kentucky. I even sought help from a detective. With something of this size and nature, we felt it was appropriate to return it to the family.”

After the ceremony, Bumpus accompanied the family members outside to the Snake Ridge Lookout Tower, which now stands adjacent to the Wayne National Forest Headquarters. Both daughters remember spending time with their father as a child in the tower. Sandra climbed the tower with Bumpus.

“Just climbing the tower brought back some wonderful memories,” she said. “All of you made a wish come true.”

Registration has begun for OUS classes

Fall session begins on Aug. 27 at campus, center Registration is currently underway for the Fall 2018 semester at Ohio... read more