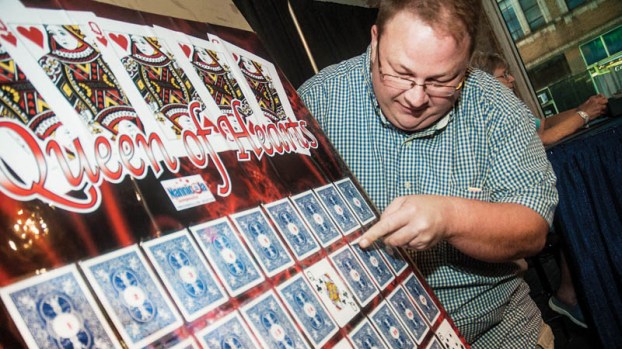 Brad Bear reveals the chosen card during Thursday evening’s Queen of Hearts drawing at the Ro-Na in downtown Ironton.

Playing with the Queen of Hearts

Each week at the Ro-Na Theater in Ironton, the Friends of Ironton are giving people a chance to win big, and support charitable causes and other organizations in the process.

A Queen of Hearts drawing takes place on Thursday nights at the theater, with doors opening at 7 p.m. and the drawing at 9 p.m.

“Queen of Hearts is a card game,” Jane Griffith, of the Friends of Ironton board, said. “There are 54 cards. You can buy a ticket for $1 each and buy as many as you want.”

Those buying a ticket pick a number from one to 54. If their ticket is drawn, then the card with their number is removed from the board at the theater and turned over.

If the queen of hearts is revealed, then they win 80 percent of the pot. If a joker is revealed, they get $100, the other queen wins them $50 and all other cards are worth $25.

The remaining 20 percent of the pot is used to continue the contest, Griffith said.

Contestants must be present to win the 80 percent. If they are not present and their card is pulled, they win 40 percent of the pot.

Once a card is selected, it is removed from the board for the duration of the contest.

The game complies with rules set forth by the state of Ohio.

“As a general rule, when all proceeds collected in a queen of hearts game are paid out to the pool of all participants in the same game, it may be considered a “pool not conducted for profit, which is not against the law in Ohio.” Ohio Attorney  General Mike DeWine said in a message on his website. “However, if the operator takes a “cut” or “rake” of the proceeds, or if game proceeds are used to pay winners of other games, then the game may be a scheme of chance, which is illegal under Ohio law.”

Griffith said Friends of Ironton does not profit from the game and that all money goes into the contest. The group, which oversees restoration of the Ro-Na, raises funds on concession sales during the drawing.

“This is our fourth week,” she said, adding that the contest will continue for the foreseeable future. “We’re just getting started.”

Contestants must be 18 years old to play and provide their legal name on tickets, as it appears on their driver’s license or identification.

In addition to the Queen of Hearts contest, the group is also organizing a 50/50 drawing each week, with proceeds going toward a charitable cause or local organization.

Thursday night’s 50/50 funds went to a scholarship named in honor of Shane Jones, a Dawson-Bryant student who died of cancer in 2002. The scholarship was launched by his father, Shawn Jones.

Griffith said others who have benefited from past drawings include the Decatur Volunteer Fire Department and American Legion Post 433.

“There are so many groups around here we would like to help,” she said.

She said the idea for a Queen of Hearts drawing came about after similar contests took place in New Boston and Guyandotte, proving popular, with pots reaching as high as six figures.