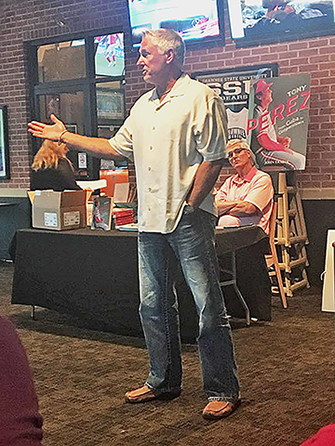 PORTSMOUTH — For Tracy Jones, making it to the major leagues was as hard as one, two, three.
Speaking at the Cincinnati Reds Hall of Fame Museum chapter stop at Buffalo Wild Wings on Tuesday, the former outfielder reflected on his baseball journey from little league to big league.
Getting to the major leagues was a thrill for Jones, but he said there were three keys reasons he was driven to play his goal.
The first reason came from disappointment. Being the smallest boy in the league at the age of 12 made it difficult for Jones to compete with the more mature players.
“Our neighborhood was one mile by one mile. I was the only one in my neighborhood who was not a little league all-star. I saw all my friends making it and I started to cry when they announced the last guy,” said Jones.
The second factor came from playing high school football and something the head coach said that woke up his character.
“In high school, I played football and my coach told me I was a backup quarterback. And my coach told me in front of the whole team ‘you make up more excuses than Carter has pills,” said Jones.
The third and most important factor was his father. Although he was old school and virtually impossible to get a compliment, Jones’ father was the main driving force in his success.
“My dad never said he was proud of me that I played in the big leagues. He never really said ‘good job.’ I once went 4-for-5 in Seattle. I was actually 4-for-4 and in my last at-bat I popped up and he said, ‘What happened to you in that last at-bat?’ He just kept pushing and pushing and pushing. That made me a ballplayer,” said Jones.
“Did I know he was proud of me? Absolutely. Did he love me? Absolutely. But he was the type that just kept pushing and pushing and pushing. And that throughout my life made me a good ballplayer. He was a guy who worked at Chevron for 35 years as a refinery worker, never made over $35,000 and retired a millionaire. Six people growing up in a 1,200s-quare-foot home. He’d work two shifts and he’d come home and throw fly balls to me or he’d do some soft toss.”
Jones will often self-deprecate about his career and playing ability, but one fan recently pointed out a very significant fact.
“Someone came up to me and said, ‘You’re one of 192,138 whoever played the game of baseball.’ And I thought to myself, ‘you know, that’ s pretty tough to do. Just to be able to reach that level, to be able to play,” said the former Reds’ player.
Jones, 57, played six seasons in the major league and the first were with the Reds. He was traded to the Montreal Expos in 1988 with Pat Pacillo for catcher Jeff Reed, outfielder Herm Winningham and pitcher Randy St. Claire.
Jones batted .273 for his career with 27 home runs and 164 runs batted in. He had 62 stolen bases. His best season was 1987 when he hit .290 with 31 stolen bases.
On June 7, 1982, Jones was drafted by the New York Mets in the fourth round of the amateur draft, but did not sign. On January 11, 1983, Jones was drafted by the Cincinnati Reds in the first round of the amateur draft.
Jones went on to make his major league debut with the Cincinnati Reds on April 7, 1986 against the Philadelphia Phillies and played for the Reds until 1988 when he was traded to the Montreal Expos. His first hit came against Philadelphia off Hall of Fame pitcher Steve Carlton.
Tony Perez was scheduled to play first base on Opening Day and Nick Esasky was in left field. But Perez had a pulled groin and couldn’t play, so manager Pete Rose moved Esasky to first base and put Jones in left field.
Jones was sitting in his locker when Rose told him he was playing. Jones was visibly shaking.
“What’s wrong?” asked Rose.
“I’m nervous,” said Jones.
“You’re nervous? I was up all last night thinking about you playing in left field,” shot back Rose.
Jones is also well known for his longtime tenure as a radio host on 700 WLW, the Reds Flagship station, where he still does the daily feature “Brennaman and Jones on Baseball.”
Jones’ son Hunter was drafted by the Cleveland Indians in the 11th round of the 2010 draft. He was released by the Indians in 2013.
But after a year out of baseball, Hunter Jones returned and is currently in the Washington Nationals’ minor league system.
“I’m proud of him,” said Jones.
Also attending the chapter event was Cincinnati Enquirer sports writer John Eraldi who was selling and signing his seventh book about the Reds.
The book, “Tony Perez: From Cuba To Cooperstown” is the first biographical book about the Reds’ Major League Baseball Hall of Fame first baseman.

ATLANTA (AP) — The body of a third-party contractor has been found inside a walk-in freezer at SunTrust Park. The... read more