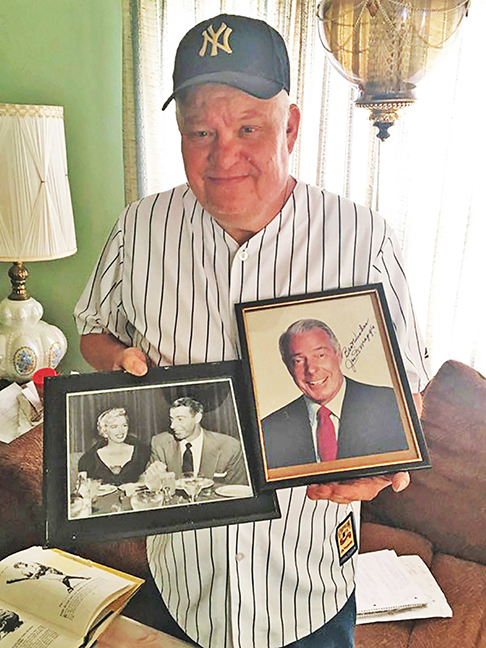 FIREBRICK, Ky. — John Carpenter’s memorabilia collection began with an autograph of Miami Dolphins’ linebacker Nick Buoniconti in 1974.
The collection hasn’t stop since then, totaling more than 7,000 items and listed in the Guiness Book of World Records as the largest private collection in the world and was featured in the 2005 Ripley’s Believe It or Not “Expect The Unexpected” edition.
But one of the biggest names in his collection wasn’t an athlete. In fact, the only connection this person had with sports was being married to an athlete.
And who was this person?
John Carpenter has an autograph in his collection that is invaluable. And it’s only half of the person’s name. The paper is simply signed, “Marilyn.”
That’s Marilyn as in Marilyn Monroe. Marilyn as in famous actress, model, singer and sex symbol. Marilyn as in Joe DiMaggio’s wife. Marilyn as in secret lover of President John Kennedy and his brother, Attorney General Bobby Kennedy.
Yes, that Marilyn.
The signature has been verified by a professor in Cincinnati.
Carpenter has approximately 3,000 autographs, 1,100 jerseys and T-shirts and 300 baseballs. He said the collection includes more than 300 New York Yankees related items.
“I worked at it. I talked to some people and went to see some people. Some came here (to his home),” said Carpenter.
One of the people he talked with was the late New York Yankees’ owner George Steinbrenner.
“Steinbrenner read about me in USA Today and he called me. He called DiMaggio and told him about me and DiMaggio called me and said, ‘I’m going to have to come to your home,’” said Carpenter.
Born Norma Jeane Mortenson, Monroe began dating Joe DiMaggio in 1952 and they were married January 14, 1956. But nine months later the couple filed for divorce.
Carpenter said DiMaggio was as humble and respectful during their meeting as he was as a player.
“He didn’t want any glory. He never wanted any glory,” said Carpenter. “He told me stories about Marilyn. He told me (his brother) Vince was as good as many other great players.
“(DiMaggio) said Ted Williams was the greatest hitter he ever saw and if (Williams) hadn’t gone to (World War II), he would have hit 700 home runs.”
Williams came to Carpenter’s house in 1982.
Joe and Dom DiMaggio aren’t the only former Yankees to visit Carpenter’s home. Hall of Fame centerfielder Mickey Mantle made the trip in 1983.
Carpenter said there was a connection between Joe DiMaggio and Mantle besides being Yankees, playing centerfield and making the Hall of Fame.
“DiMaggio told me Marilyn’s favorite player was Mickey Mantle,” said Carpenter.
Carpenter is a big fan of DiMaggio, Mantle and many other Yankee players. When asked who is all-time favorite player is, Carpenter didn’t hesitate for even a second with his answer.
“Babe Ruth,” said Carpenter who also happens to own the baseball Ruth hit for his 552nd home run in Detroit.
“I like Mickey Mantle, Joe DiMaggio, Earl Combs, Lou Gehrig. There are just so many great players. But I like Babe Ruth. He saved baseball. I think he was the greatest baseball player of all-time.”
Carpenter was presented a plaque in 2009 by the organization proclaiming him the No. 1 Yankees fan. The Yankees were playing the Los Angeles Angels.
“I just went crazy. I live the Yankees,” said Carpenter.
Besides being named the top Yankees fan, Carpenter was honored with his own coffee mug that had his picture with him holding his plaque. He was also given his own bobble head figure.
But the year prior to being named the Yankees’ best fan, he appeared on the front of the Wheaties cereal box.
The company had several different sports personalities not in the traditional sports genre such as an ice skater.
“I was just lucky, I guess,” said Carpenter with the humility of DiMaggio.
Carpenter’s collection information was included in the National Baseball Hall of Fame in 2013.
He continues to add memorabilia and has no plans of stopping.
“It’s a lot of fun,” said Carpenter.
See what you started Nick Buoniconti.

The West Virginia 2023 Dynasty girls’ AAU under13 basketball team will compete in the “Run 4 the Roses Tournament” in... read more