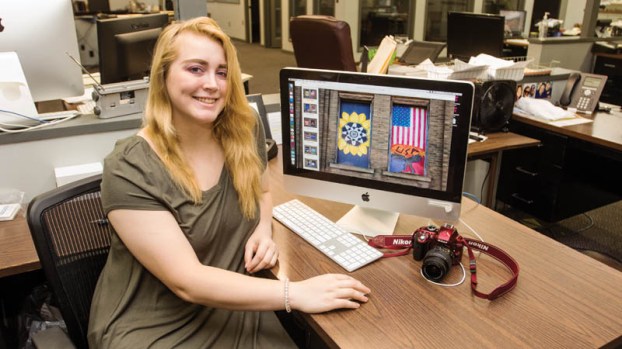 Brianna Robinson, a Dawson-Bryant graduate and Morehead State University student, will be writing business stories and taking photos for The Tribune this summer.

DEERING — A Deering native, who is studying convergent media at Morehead State University, will be contributing to The Tribune this summer, focusing on local business stories and photography.

Brianna Robinson, 19, of Ironton, will be interning with the paper over the next few months.

She said her studies at Morehead encompass everything related to media.

“We have a TV station, a radio station and a student newspaper,” she said.

The daughter of Mary Lee Robinson and Tim Robinson and a 2017 graduate of Dawson-Bryant High School, she is now a sophomore at the university.

She says, upon graduation, she plans to pursue photography.

“Wherever it takes me,” she said.

She described her interest in photography.

“I like that you can take an object that you see every day and put it from a different viewpoint,” she said. “You can change the way people see things.”

Robinson was featured in The Tribune in April 2016, when, as a junior in high school, she was named Miss Lawrence County.

She was also following in the footsteps of her father, who was a champion driver on the racetrack.

She began racing dirt modified cars since the age of 13 and is continuing to do so through college.

“I was just out working on the car,” she said during her interview.

Robinson will be joining fellow intern Maddie Cogan in doing business features for The Tribune.

While Cogan will focus on Proctorville, Chesapeake and the eastern end of the county, Robinson will cover Ironton and the area surrounding it.