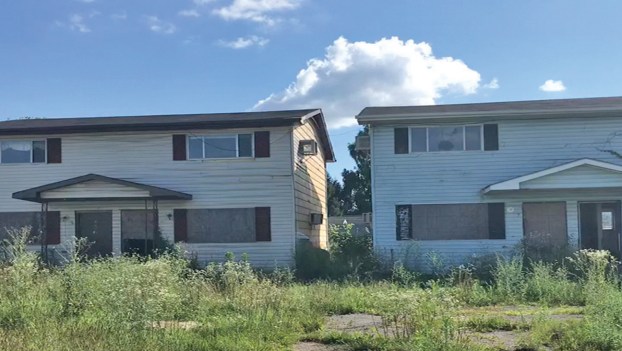 Submitted photo The Otter Property, located on North Kenova Road in South Point, will be demolished by the Lawrence County Land Bank by Labor Day, according to the village's mayor, Jeff Gaskin.

SOUTH POINT — A set of buildings long considered an eyesore by South Point residents is set to come down in the coming months.

Mayor Jeff Gaskin announced at Tuesday’s meeting of village council that the Otter Property, located at North Kenova Road and Lawrence Avenue, has been approved by the Lawrence County Land Bank for demolition.

The property had been tied up in legal matters and needed cleared of bankruptcy, as village leaders sought to get it demolished.

“Today I got a call from the land bank,” Gaskin said. “The Otter Property on North Kenova Road is done. All the I’s are dotted and the T’s are crossed.”

The news was greeted by cheers from the room.

Gaskin said the property must first undergo asbestos abatement, then a contract for demolition will come.

“The land bank has assured me that there will be a vacant lot there by Labor Day,” Gaskin said.

The property, a former apartment complex, has been vacant for more than 10 years he said, and a series of four mayors had worked to rid the village of it.

Gaskin said after demolition, the land bank would fill in the property and maintain it until it is sold.

The land bank took down its 100th structure earlier this month, with the demolition of the former Pulley Nursing Home in Burlington, which was the agency’s first removal of a commercial building.

At the beginning of the meeting, during the public comment period, the council heard from Katrina Anson, owner of Trinity Cheer and Dance, who are seeking a new location for their classes.

Anson, who had several instructors and children with her, said the team had national titlists among them and that they are seeking to offer classes four days a week, with more during competition seasons.

Anson said she has been told by Joe Freeman, owner of Quality Care Nursing, that he would donate the use of the old South Point Elementary building, located on Washington Street, for the business.

However, as the building is in a location zoned for residential use, Anson had to make a request to the council to use the building.

Gaskin told Anson that, according to a village ordinance, her business does not meet the qualifications to go into the building.

Gaskin said the ordinance was intended to preserve the residential nature of the neighborhood and was a “contentious” issue when passed about a decade ago.

“These were duly passed and we have to live by them,” he said

He then asked the council what action they would like to take on the matter.

Council member Chris Smith said that no one on the council was opposed to Anson’s business, but feared a “Pandora’s Box” effect and wanted to make sure the process was done legally and with no repercussions.

Lambert said a variance for the ordinance could be used for the single building. A variance is considered if there are special circumstances and it is determined the benefits to the property owner would outweigh any detriment cause to any individual.

The variance must be applied for by the property owner and Gaskin advised her that, for it to be considered, to have Freeman apply for it at next month’s meeting.

All creatures great and small