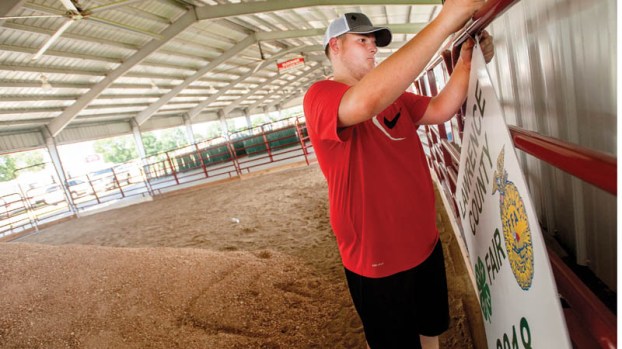 4-H member Chad Morris hangs a banner in the main barn at the Lawrence County Fairgrounds.

ROME TOWNSHIP — Prefair events begin today at the Lawrence County Fairgrounds and this year’s fair kicks off in full on Sunday, with the fair parade and the crowning of this year’s queen and princess.

The fair serves as a showcase for members of 4-H and FFA programs throughout the county, with shows for rabbits, hogs, steer, chickens and many more categories.

She was at the fairgrounds on Tuesday, labeling and preparing stalls for the animals, which will be brought in today.

When asked how much work goes into preparation, she laughed and said “a lot.”

4-H has seven days of activities at the fair, from animals shows, to auctions, to Cloverbud program activities.

“Everything you see on the schedule with 4-H next to it, all that is prepped,” Fraley said.

One of the 4-H members helping Fraley with preparations was Chad Morris, 18, who will be a senior at Symmes Valley High School this fall.

He said this is his ninth year at the fair and that his 4-H age is 17, meaning that he has one more year to take part in the fair after this.

The son of Eric and Lori Morris, he comes from a multi-generation fair family, with both his parents and grandparents having taken part, as well as his sister, Brenna, who won in several categories.

He said his family camps out at the fairgrounds each year.

“We’re here from Saturday to Saturday, then haul out Sunday morning,” he said.

He spoke of his work getting ready for this year’s fair.

“There have been a lot of late nights,” he said. “I’ve been getting the animals ready and looking good.”

Morris will be showing steer this year, a category he has competed in at past fairs, having won has won grand champion in the feeder steer and reserve champion for breeding heifer.

Morris said, upon graduation he plans to go into civil engineering, but will continue to raise animals. He his years at the fair have taught him much.

“You learn teamwork, how to take care of the animals and responsibility,” he said. “It’s a great experience.”