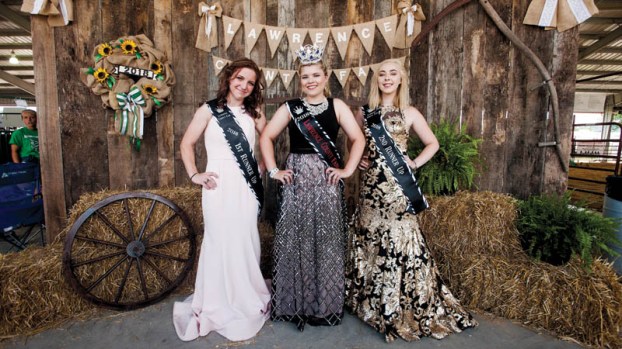 ROME TOWNSHIP — The animals have arrived, the sawdust has been spread and the rides are in place.

The Lawrence County Fair kicked off on Sunday with an opening ceremony and the crowning of the fair queen and princess.

Following the fair parade, the crowd gathered in the fairs’ main barn, where contestants for the two competitions walked the ring and introduced themselves.

Montana Runnels, 18, of Scottown, a Fairland High graduate, was named the fair’s queen.

Runnels, the daughter of Shawn Runnels, Lisa Runnels, Brad Carpenter and Amber Tredway, is a member of the Greasy Ridge Gang 4-H Club.

“I was not expecting it,” she said of the honor, inheriting the crown from 2017 fair queen Matison Klaiber.

Runnels served on student council at Fairland and played softball for the Lady Dragons.

She received the Franklin B. Walter All-Scholastic Award this year from the Ohio Educational Service Center.

She was named fair princess in 2013 and has shown rabbits, fancy poultry and cattle at the fair in her nine years in 4-H. She said she will be attending Morehead State in the fall, planning to continue to work with animals in her career.

“I’m going for pre-vet and veterinary science,” she said.

Kaitlin Harrison was named fair princess. The daughter of J.D. and Deana Akers, she is a member of Scottown Farmers and Farmerettes 4-H Club and is a junior as a homeschool student through Six Akers Farm Homeschooling Academy.

“It’s amazing,” she said of the title, which will passed to her from Calaway. “I was so nervous.”

First runner-up for princess was Brea Belville, a freshman at Symmes Valley High, and second runner-up was Sophie Mootz, an eighth grader at Rock Hill Middle..

The opening ceremony drew officials from around the county and region, who spoke following fair board chair Randy Lambert.

County Commissioner Freddie Hayes Jr., who has served on the board, described the fair as “my favorite week of the year.”

He told the crowd of the recent $1 million in grant money secured from the state legislature for the grounds, which would see a new senior center and an EMS station built on unused land, upgrades to the bathrooms and the reminder used to pay down the $300,000 loan on the main barn.

“It will be paid off and we’ll be in good shape,” Hayes said. “We have a great facility here.”