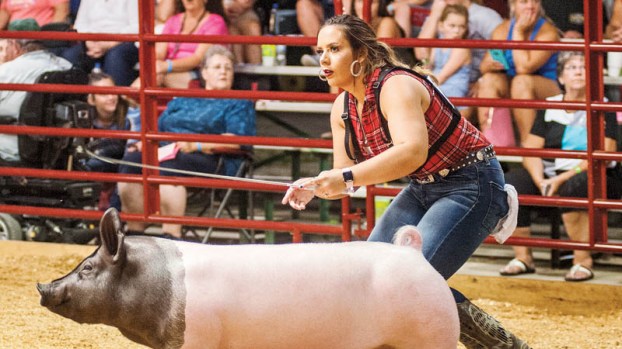 ROME TOWNSHIP — The Lawrence County Fair is in full swing and the bleachers were packed for Tuesday’s market hog show.

Hannah Gates was named grand champion and Angel Lewis was reserve champion for their respective hogs.

Gates is a member of Scotttown Farmers and Farmerettes 4-H Club and has been showing pigs since she was 9, and, with only one year left to show, won her first grand champion.

“It feels great because I put a lot of hard work into it,” Gates stated, when asked about winning.

Gates is also a graduate of Symmes Valley High School and grew up in a in a 4-H family, with her aunt being an advisor in the Scotttown Farmers and Farmerettes.

Angel Lewis is a member of Gingham and Denim 4-H Club and has been showing pigs for four years. At the age 14, Lewis has won several titles, already winning reserve champion twice and grand champion once, and, this week, added another reserve champion title.

Lewis attends Symmes Valley High School and, when asked about how she felt about winning another reserve title, Lewis simply said she was “excited and relieved.”