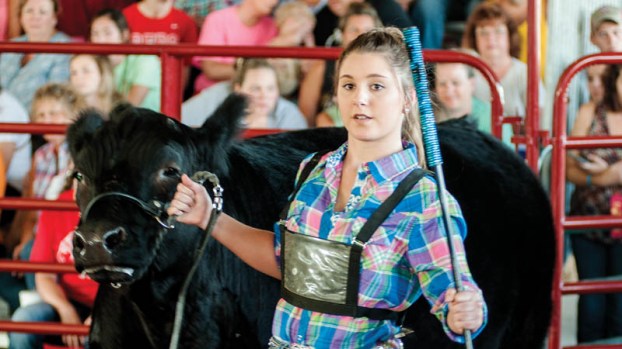 ROME TOWNSHIP — Market steers were the focus at the 4-H arena at the 2018 Lawrence County Fair.

And the big winners were 4-H girls, who took the top spots in the market steer and the showmanship shows.

Craft, a member of the Arabia All-Stars 4-H club, said she felt “very proud and accomplished” for getting grand champion.

“It has been a year of work getting here,” she said. She got reserve champion in 2012. “It takes a lot of work. You have to work their hair and make sure they act right.”

The 15-year-old said she plans to continue to show steers.
Ball, with the Starlight 4-H club in Kitts Hill, said she was “very, very pleased with my steer. It could have gone a lot of different ways. But I am very happy with what the judge picked.”

The 16-year-old has been in 4-H for eight years and she also won reserve champion in 2015.

She said it could be a challenge showing a steer in the arena.

Klaiber, who took senior showman, is 18, meaning this is the last year she can compete in 4-H. She won grand champion market steer in 2016 and 2017.

She is a member of the Gingham and Denim 4-H club.

When asked how she felt about taking the top spot for steer showmanship, she replied,  “Ask me Saturday after the animal sales. That is when it is going to sink in.”

She said, although this is the last year she can compete, next year she plans to volunteer on the Junior Fair Board and help out Rachael Fraley, the extension agent for The Ohio State University.

“I’ll do as much as I can. I love being at the fair, getting to know everyone and being part of the community.”

Nine-year-old Ferguson is a member of the Starlight 4-H club of Kitts Hill and was happy to take the junior showman trophy home with her.

“I’m feeling very excited,” she said. “I am very happy because it is my first year. I was very shocked and I couldn’t wait to get out of the show ring and have everyone congratulate me.”

She said she was sad because she didn’t take grand or reserve champion, “but there is next year.”