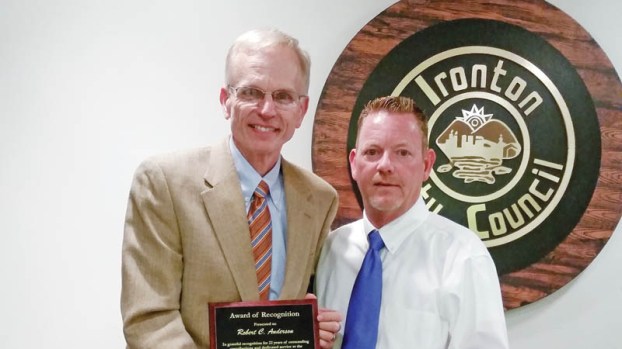 Now-former city solicitor Bob Anderson poses with Ironton Vice Mayor Rich Blankenship on Thursday evening after the Ironton City Council presented Anderson with a key to the city in appreciation for his 22 years as a city solicitor. Anderson is retiring after 40 years as a practicing attorney.

Anderson retires after 4 decades as attorney

Has been a city solicitor for 22 years

Ironton attorney Bob Anderson got the key to the city at Thursday’s Ironton City Council meeting to mark his 22 years as a city solicitor. The night also marked his final council meeting since he is retiring after 40 years as an attorney.

He is leaving Anderson and Anderson, a firm that includes his brother, Mack, who is also a city solicitor and his nephew Brigham, who is the Lawrence County Prosecutor and will take over his role as a Ironton City Solicitor. The Anderson brothers started serving as co-solicitors in 1996 after Frank McCown stepped down.

“We accepted the one position and we split the salaries and responsibilities,” Anderson explained. “And now Mack and Brigham will do the same thing that Mack and I did.”

Anderson is moving to South Carolina and he says he will miss being an attorney.

“But I have some things in mind that I might do down there to keep my mind active,” he said. “I might do community service.”

Anderson said he was happy to receive the key to the city and that he has always been impressed with the work that all those who have served on city council.

“It was a nice opportunity to be one of the city’s attorneys for these past years,” he said.

Vice Mayor Rich Blankenship thanked Anderson for his years of service and said he always relied on his advice.

“Bob didn’t just tell me what I wanted to hear and that is what I like about him,” he said. “He told me what his true legal, professional opinion was, not just what I wanted it to be and I always appreciated that.”

In his four decades as an attorney, Anderson spent 25 years as an assistant prosecutor, 22 years as a city solicitor and he also taught political science at Ohio University from 1986-2014. He also served for 12 years on the Ironton School Board from 1979-1991.

“We grew up with a work ethic,” said Anderson as to why he and Bob hold so many jobs. “We got it from our dad. He and his two brothers ran the grocery store and they would work from 6 a.m.-9 p.m., so we grew up with the philosophy of getting the job done.”

Anderson is retiring to Mt. Pleasant, South Carolina to be closer to his daughter, son-in-law and two grandchildren.

“It’s a nice area,” he said. “We bought a place there several years ago, so we are acclimated to the area. We are looking forward to it.”

He does admit that he will miss Ironton.

“I grew up here. My family had businesses here,” he said. Among the businesses were Anderson’s Market, Anderson’s Steakhouse and the Pizza Pub. “It was a wonderful community to grow up in the 50s and 60s. It’s still a tremendous area and I will always remember Ironton fondly.”

Council may charge to haul away

Residents could be charged $50 per tire The Ironton City Council is considering an ordinance to charge residents who leave... read more