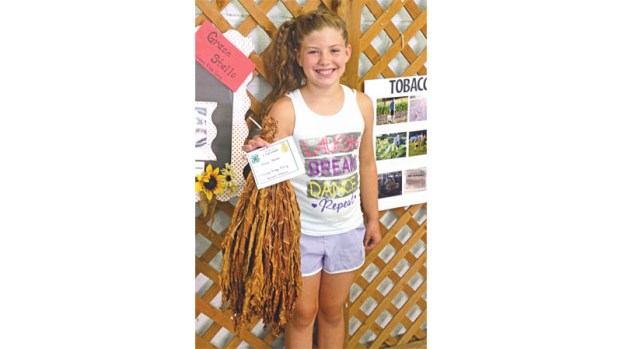 Grace Stallo, of Greasy Ridge Gang 4-H Club, holds up her hand of tobacco. As the fourth place entrant in this year’s category, her hand will be the last ever sold at the fair, when the category is eliminated following today’s auction.

Last tobacco to be sold at fair today

ROME TOWNSHIP — It’s the end of an era.

For decades, 4-H members have cultivated tobacco and sold their crops at auction at the Lawrence County Fair.

However, as times change and the participation in the practice has dwindled, the market tobacco category is being eliminated from the fair after this year.

Judging for the handful of tobacco projects took place at Saturday’s pre-fair events and Bailey Fuller, 10, of Gingham and Denim 4-H Club, was named grand champion for her hand.

Another family that has taken part in the tobacco category for a long time is the Stallos.

Wyatt Stallo was named grand champion in 2016, with Gracie Stallo coming in third that year.

Their mother, Hillary Stallo, said her family has been raising tobacco for 27 years, with all but two of those years being commercial.

“We’ve always brought tobacco to the fair, every year, since I was a small child,” she said.

While several factors, such as changing attitudes toward the product, have been a factor in its decline, its decline at the fair is rooted in the federal tobacco buyout.

“It used to be a major cash crop in Lawrence County,” Hillary Stallo said. “But after the buyout, you have to have a contract with a buyer.”

She said, with no commercial buyer, families do not want to put the hours of time and work to raise the crop, with no chance of purchase.

This year, there were only four tobacco projects entered at the fair.

“Sometimes as many as 21,” Hillary said.

This year’s hands of tobacco will go up for auction today, preceding the small animal auction at the fair.

As fourth place in this year’s competition, Grace Stallo’s hand of tobacco will be among those going up for auction, making it the last ever in the fair’s history.

Grace, of Greasy Ridge Gang 4-H Club, is a student at Symmes Valley and has been taking part in the fair for six years, since she was a Cloverbud and presenting 4-H projects for three years.

For the Stallos and others, it will be a bittersweet moment, seeing a tradition at the fair come to an end.

The small market animal and tobacco sale will take place at 2 p.m. today.

Anderson retires after 4 decades as attorney

Has been a city solicitor for 22 years Ironton attorney Bob Anderson got the key to the city at Thursday’s... read more