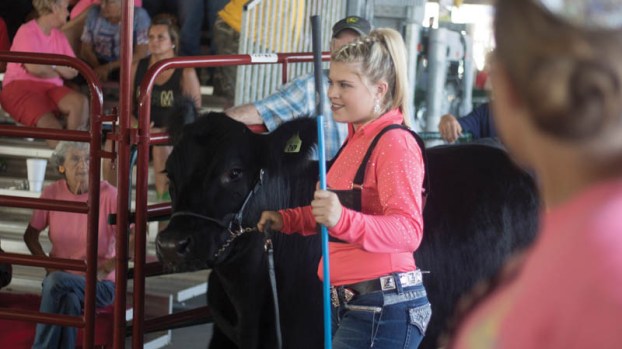 Montana Runnels, the 2018 Lawrence County Fair Queen, competes with her animal in the market steer show in the main barn on Wednesday.

Belle of the barn

The Lawrence County Fair entails a lot of things, showing animals, fried food and plenty of rides but adding a little glamour to the event is the fair queen.

Montana Runnels was crowned as 2018 Lawrence County Fair Queen Sunday and has been working non-stop ever since. With responsibilities ranging from helping kids show their animals to meeting state and county officials to helping board the hogs when they are short-handed, Runnels did it all at this year’s fair, which ended Saturday.

“I love the connections I develop,” she said. “I have met so many people from state senators, auditors, county officials and kids from all around this week. I love being able to be that one person they look up to”

Runnels has been involved in her 4-H club, the Greasy Ridge Gang, for nine years and has shown a variety of animals including rabbits, goats, hogs and, most recently, cattle.

However, showing animals is not all it takes to become fair queen.

The first step to becoming fair queen is quite simple: Fill out an application which asks questions like how long the potential queen has been in 4-H and how involved they are in their 4-H clubs, school activities and community service.

The next step is to change into formal wear and, the following day, the queen, princess and runner up will be crowned. However, this is not Runnels first run as fair royalty, as she was also crowned fair princess in 2013 and was second runner-up for queen in 2017.

Runnels is a graduate of Fairland and plans to continue her involvement with animals at Morehead State University in the fall as she plans to major in veterinary science.