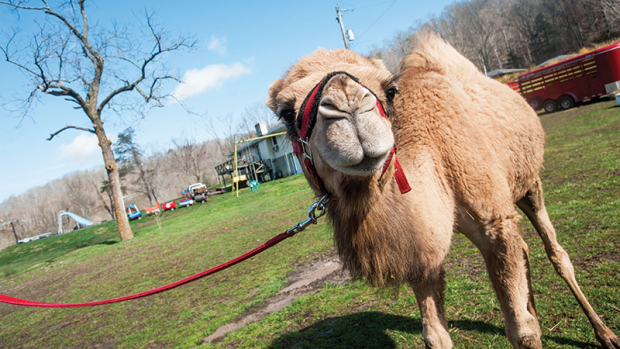 The couple has made their living running the BARKer Shop, located at 923 S. 3rd Street in Ironton, a full-time salon offering high quality grooming for pets. Photo by Jessica St. James

Their place is a zoo

For the past 12 years, Kate and Tony Barker have worked around animals.

The couple has made their living running the BARKer Shop, located at 923 S. 3rd Street in Ironton, a full-time salon offering high quality grooming for pets.

Back in October, people stopping by the shop may have noticed an unusual addition to the place.

The Barkers had purchased Wally, an 8-month-old wallaby and brought him to work each day. When they first got him, Wally was no bigger than a cat and was kept in a pouch.

By spring, he had noticeably grown and was now about twice that size.

Wally is but one of the animals the Barkers have for their new business venture, a mobile petting zoo. They have already acquired a number, who now reside at their farm in Pedro.

“We first started getting animals in June of last year,” Tony said. “It started   with alpacas.”

“We have two,” Kate said. “They’re very friendly and we would people over. And we got goats, the same thing happened.”

The couple are launching the petting zoo, along with Tony’s parents, Deb and Terry Barker.

Kate said they were wanting to offer the community something that was not available.

“We got to thinking about parties,” she said. “We wanted to have something different. Our son has outgrown inflatables. A lot of kids have never been to a zoo and seen exotic animals and we could bring them to them.”

In addition to the wallaby, the goats and the alpacas, the Barkers have acquired a camel, a miniature donkey and a zebu, which Kate describes as “a miniature cow.”

They said the camel came from South Dakota, but all of the other animals originated with breeders in Ohio.

As part of the preparation, Tony said they had to get permits with the United States Department of Agriculture.

“They’re pretty strict about enclosures and cleanliness,” he said, noting the farm is inspected annually. “And they look at diet and vet care.”

Kate said the goal of the zoo’s living space on the farm is to make the animals feel at home.

“We try to keep it like a habitat,” she said.

As for upkeep, she said they have a vet from The Ohio State University they can call on, while they constantly handle the animals.

“We try to get them used to being around people,” she said.

In addition, she said the llamas and alpacas have to be sheared once a year.

“Every summer,” she said.

They said they have already taken the animals to their first event, a birthday party in Covington, Kentucky, in recent weeks, while they have others lined up, such as the Party on the Hill, an annual end-of-school-year event at South Point High School, in which hundreds of students from the district’s elementary, middle and high schools turn out.

They’ve also visited Raceland, Kentucky, where they were part of activities for kindergarten sign-ups at Campbell Elementary School.

The Barkers said, in addition to traveling throughout the Tri-State with the animals, they are also offering up their farm for people to book parties.

They said the most popular animal they have has been the miniature donkey.

“He gets the most hits on Facebook,” Tony said.

“He’s super friendly,” she said. “He’s so gentle and they pet him all over.”

She said the main question they are usually asked is about the llamas and whether they spit, which she said only happened if they’re threatened.

Kate said they have enjoyed the  business so far.

“It’s fun for the whole family, and we like being outside,” she said.

As for future additions to the zoo, Kate said they are “looking for something you don’t see every day,” and are considering reindeer, a lemur or possibly a porcupine.

They said they hope to keep adding to the zoo and growing it.

For more information on the BARKer Shop and the BARKer Farm and mobile petting zoo, visit the businesses’ Facebook pages.

Where the wildflower grows

One of the most talked-about recent developments in downtown Huntington is The Market, a food and shopping destination located on... read more