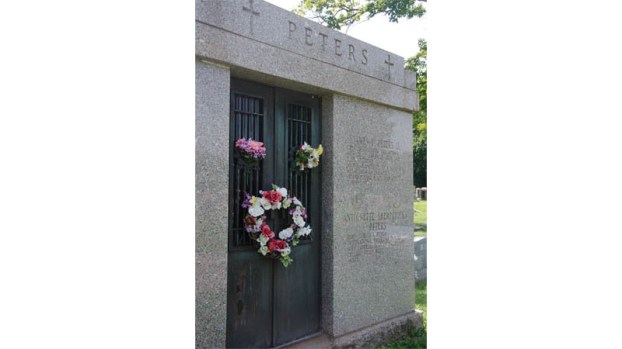 The Tribune/Heath Harrison The Peters mausoleum at Woodland Cemetery in Ironton is the final resting place of Antoinette Sherpetosky Peters, a member of the Imperial Russian Ballet who danced for the country's last tsar, Nicholas II. 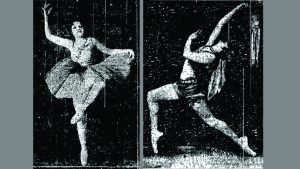 These photos from the early 1920s show ballet star Antoinette Sherpatoska Peters, when she was performing as “Miss Sherpetosky” in Chicago-area shows. Peters is buried at Woodland Cemetery in Ironton.

Peters danced for last Russian tsar, who was killed 100 years ago today

Near the front of Woodland Cemetery stands the Peters mausoleum. The final resting place of members of a prominent iron industry family, it also serves as a link to the Russian monarchy that ended a century ago.

It was 100 years ago tonight that Nicholas II, the last of Russia’s tsars, was awakened by his Bolshevik captors at the Ipatiev House in Yekaterinburg.

With Russia’s economy collapsing and the country mired in World War I, the tsar had been forced to abdicate the throne during the preceding year.

In the early hours of the night, Nicholas, along with his wife, children and four members of his staff were murdered by a firing squad. The deaths, said to be ordered by the county’s new ruler, Vladimir Lenin, marked the end of the Romanov Dynasty that had ruled Russia for 300 years.

On May 7, 1894, the same year Nicholas assumed the throne, Antoinette Sherpetosky was born in Lithuania. The Baltic state was then part of the Russian Empire.

The daughter of Stephen and Barbara Sherpetosky, Antoinette was a gifted dancer, mastering the ballet that had such a rich tradition in her country. As a child, she performed with the Imperial Russian Ballet, one of the world’s most prestigious companies, known for its legendary dancers such as Anna Pavolova, Marie Taglioni and Jules Perrot.

The ballet was tied closely to the monarchy, with its directors personally appointed by the tsar.

During her time with the company in the Russian capital of St. Petersberg, Antoinette performed for Nicholas II and his family, receiving a gift of jewels from the monarch.

When she was a teenager, her family moved to the United States, where her father went to work in the steel mills around Chicago.

With an investment in real estate, Stephen was considered a pioneer of the Indiana Harbor region of East Chicago, erecting multiple buildings and running both grocery and liquor businesses.

While in Chicago, Antoinette continued to dance, and, at the age of 21, in 1916, the same year revolution engulfed her former home, she married James F. Peters, a native of the Ironton area.

Peters came from a prominent family in the iron industry, (the village of Coal Grove was originally known as Petersburg) and had developed the blast furnace industry around  Hanging Rock before moving to East Chicago, where he was supervisor of the Inland Steel Company.

While married to Peters, Antoinette performed under the name “Miss Sherpetosky,” specializing in ballet in Russian opera, and engaging in a six-week tour of several American cities alongside other former members of the Imperial Ballet.

She was praised for her figure and received an award in a Chicago area contest for it, while her grace landed a cover feature in Physical Couture magazine. A 1920s newspaper article at the time hailed her as “an artist of unusual merit in character dancing and in the classic toe.”

She stuck with the profession as she entered her 30s, establishing Antoinette Sherpetoska’s School of Dancing in Indiana Harbor.

An advertisement for the school from the 1920s shows that it offered classes for the Charleston dance craze of the time, as well as instruction in Spanish, Russian, Hawaiian, acrobatic and stage dancing, and classic toe.

“Ladies keen for a trim figure should know that the ideal corset is a properly trained set of muscles,” her pitch read.

While in her mid-40s, Antoinette performed for U.S. soldiers at United Service Organizations shows during World War II. Following the war, she continued to dance for events organized by the Veterans of Foreign Wars and the American Legion and was honored by the USO.

By the 1950s, James had retired from the steel industry and the couple moved to Delray Beach, Florida, where Antoinette continued to teach dance.

On May 6, 1962, the couple were staying at their property in Chicago and were paying a visit to a nephew. While driving at night on U.S. Route 12, their vehicle was struck by car, driven by Carl Smith, 22. Smith had swerved and crossed the diving line of the highway, colliding into the Peters’ vehicle.

Antoinette, 67, was killed in the crash, along with Smith and his passenger, Dion Bey, 21.

James, who was injured in the accident, had his wife interred at Woodland in his hometown of Ironton. He would join her 11 years later, when he died at the age of 84.

However, Antoinette suffered indignity in her rest. According to local historians, her mausoleum was broken into, with her casket found on the floor. The glass top of the casket had been shattered in one corner and two of her fingers were damaged when the thieves stole her rings. Also missing was a pendent of jewels given to her by Nicholas II.

In later years, the ceramic portraits James had made for the mausoleum, featuring Antoinette in costume, were shot up by vandals and were eventually removed.

In recent years, her legacy has been celebrated in Ironton, with her crypt, inscribed with her nickname of “Teeny,” a popular attraction on the Woodland Cemetery Historical Walk each fall.

Antoinette is portrayed each year by Yvonne Dekay, a kindred spirit, who teaches ballet in Ironton. Dekay, who said she has researched Antoinette’s life presents the dancer’s history in the first person to attendees.

— The Peters mausoleum is located in Section 7 at Woodland Cemetery.

Hepatitis A continues to spread around Kentucky