Mantle card worth $12M on display 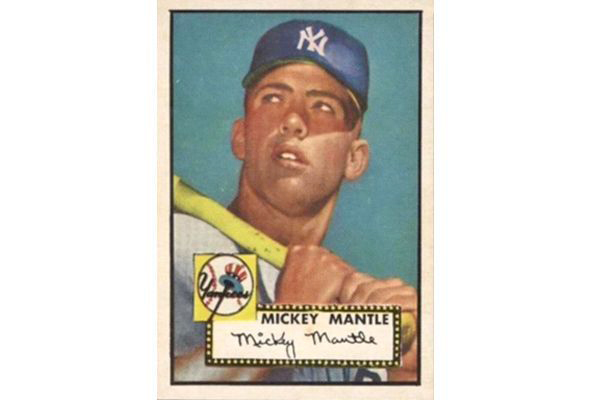 DENVER (AP) — The “Holy Grail” of baseball cards, a pristine 1952 Topps Mickey Mantle valued at several million dollars, was delivered to the History Colorado Center on Monday via armored truck for a 72-hour public display.
“I want the community to enjoy looking at the card,” said its owner, retired lawyer Marshall Fogel of Denver. “It’s the finest card ever made, and it just happens to be my favorite player, Mickey Mantle.”
The cardboard treasure was transported from a bank’s safe deposit vault and placed in a secure case that once housed Thomas Jefferson’s Bible, with UV-lens protection and temperature/humidity control.
The card, which Fogel said was insured for $12 million “and is probably worth more than that,” is being displayed in the lobby of the museum where its current exhibition, “Play Ball!” features Fogel’s collection of classic baseball artifacts.
Mike Fruitman, a sports card expert in Aurora, Colorado, said Fogel’s ‘52 Mantle card is at least on par with the 1909 Honus Wagner T206 card whose rarity is attributed to Wagner’s supposed disapproval of the card being sold along with tobacco.
One reason Mantle’s 1952 card is so rare is that so many of them were returned along with other unsold cards by retailers making room for the 1953 cards. The returned ‘52 cards were subsequently sunk from a barge in the Hudson River.
Fogel’s card is a gem mint PSA 10, one of only three ‘52 Mantle cards in existence with this rating. Of the three, Fogel’s card is the only “perfect 10,” what’s known in the collecting world as an A-plus. The other two are As.
“So, yes it’s the Holy Grail of sports cards,” Fruitman said. “Mickey Mantle was exceedingly more popular than Wagner. But each has a romantic backstory about them.”
Fogel also owns the original photo that was used to make the Wagner T206 card.
Like so many others, Fogel caught the collecting bug in the late 1980s, but he focused on high-end, one-of-a-kind pieces that he sometimes displays at Yankee Stadium.
In addition to amassing one of the most valuable baseball memorabilia collections in the world, he also has boxing artifacts and a collection of original historic photographs.
“I always liked boxing. I used to box as a kid. My dad used to take me to the fights as a kid. So, I have Jack Dempsey’s gloves, Sugar Ray Leonard, Muhammad Ali. I have Patrick Roy’s Stanley Cup jersey, John Elway’s uniform. I have my photo collection, I collect ‘Wizard of Oz,’ Marylin Monroe. I have one of the original photos of Iwo Jima, the flag raising.
“But I mainly concentrate on our national game, which is really the fiber of our culture. Everybody loves baseball.”
He showed an Associated Press reporter at his home a Bath Ruth-signed baseball, a rare Ty Cobb-signed ball, Lou Gehrig’s last signed bat and a ball signed by of all the game’s greats who toured Japan in 1934.
The Mantle card is kept in a bank’s safe deposit vault in Denver, and Fogel said he takes it out about once a year to admire it.
“I’d go to the bank for other reasons and I’d take it out and pinch myself,” he said.
“Oh, I enjoy it. I have his uniform that used to be in his restaurant across from Central Park in Manhattan. It’s on display here,” Fogel said. “More than seeing this card in my hand, but I have to admit — now, don’t tell anybody — but I put Mantle’s uniform on.”
The last time Fogel displayed his Mickey Mantle card in public was at a sports memorabilia convention more than two decades ago.
Fogel paid $120,000 for the card in 1996 and he figures it’s now worth 100 times that.
“People said I was stupid to buy it,” Fogel told the AP. “Now, I’m wisely eccentric.”
Unlike the “Play Ball!” exhibit, which is running through the baseball season, the Mantle card will only be on display for the All-Star break. Jason Hanson, the museum’s chief creative officer and lead curator of the exhibit, said there are many reasons for that but primarily because no one wants the brilliant colors from the 66-year-old baseball card to fade under the lights.
It will head back into Fogel’s safe deposit box midweek.
Fogel said he’s no longer looking to buy any baseball memorabilia.
“I’m very satisfied with what I possess,” he said. “There’s got to be a point where you enjoy what you have.”
And he’s enjoying the Mantle card most of all, he said.
Fogel, who is in his 70s, wouldn’t say whether the card’s ultimate destination was another auction or whether he’d bequeath it to his children someday.
“I don’t know,” he said. “I’ll tell you what, I’m going to take it to heaven with me. It’s going to be laid across my chest in my casket.”