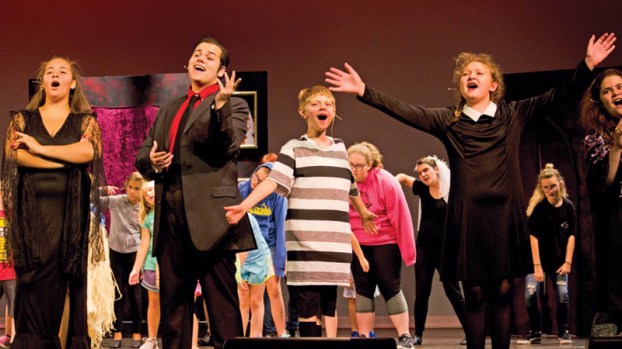 Vinessa Fressola, as Morticia, Bruce Dearfield, as Gomez, Christian Garnes, as Pugsley, and Madeline Smith, as Wednesday, perform during a dress rehearsal for “The Addams Family Young” at the Paramount Arts Center in Ashland.

Performance will be free and open to public

ASHLAND — Summer arts camps at the Paramount are winding down and participants are ready to show the public what they have learned.

The centerpiece of the art center’s summer classes for youth is a two-week production camp, in which participants learn about all stages of putting on a production.

Tonight, at 7 p.m., participants in that camp will perform “The Addams Family Young” for the public.

“It’s free and open to the community and anyone who wants to can come,” Morgan Stevens, assistant stage manager for the camp, said.

The show is based on “The Addams Family,” the macabre humor comic by cartoonist Charles Addams, which has been adapted into animation, television and film.

Stevens said the twist on this version is that it is set, chronologically, after those adaptations, with daughter Wednesday, played by Madeline Smith, reaching adulthood.

“Wednesday is grown up and has found love,” Stevens said.

The story follows her engagement to Lucas Beineke, an 18-year-old college student from Ohio, who is portrayed by Kevin Johnson, and the reaction of her parents, Gomez and Morticia, played by Bruce Dearfield and Vinessa Fressola, to the news.

Stevens said the production involves a cast of about 46, ranging in age from 8 to 16.

“We really try to teach them what it means to be in theater and all that goes into it,” she said. “They receive their scripts on Monday and they’ve developed their characters. They have done an amazing job. They’re a very, very talented group of kids.”

Matt Hammond serves as the director for the performance, with Kaitlyn Kincaid as choreographer and Sarah Brehm as assistant director.