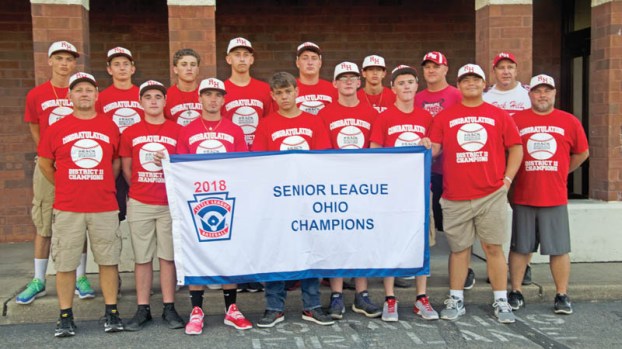 The Rock Hill Senior League Boys gather for a sendoff event at Buffalo Wild Wings in Ironton on Thursday. The team was heading to Peru, Illinois for a national tournament which runs today through Wednesday.

Members of the community gathered at Ironton Hills Shopping Center on Thursday to give the Rock Hill Senior League Boys a big sendoff.

The team recently won at the district and state level and will be in Peru, Illinois to play in a national tournament.

A celebration took place at Buffalo Wild Wings, which organizer Jason Tolliver said was “to give them a little recognition.”

“People ask me about my expectations for them,” he said. “They have surpassed them.”

As they readied for the seven and a half-hour drive, he said he was optimistic about their chances.

“I feel good,” he said. “The pitching’s good and we have a real good defense.”

His family was on hand, and his father, Elliott Gollihue, handed out bracelets with the #RACK logo.

The campaign is to inspire others to perform acts of kindness.

“It’s gone national,” he said of the effort.

While the team will be representing Rock Hill, Blankenship said it is now bigger than that.

“They will also be playing for the community and the state of Ohio,” he said.

The tournament begins today and will run through Wednesday.

Performance will be free and open to public ASHLAND — Summer arts camps at the Paramount are winding down and... read more