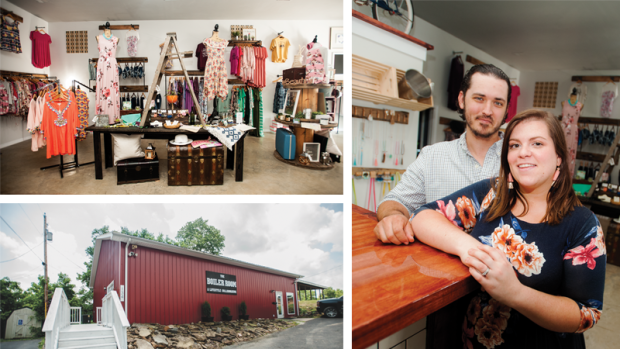 With the success of the boutique, the McWorters have decided to expand. They have relocated the boutique to 134 Beauty Dr., in a larger building, which will be home to four businesses.

When Sabrina McWhorter and her husband Nick attempted to open a restaurant in Grayson a few years ago, they ran into several roadblocks.

They quickly realized, after signing the lease, that it would cost more than they expected to bring their building up to code and install a custom range.

“That was pretty much the end of that dream,” she said. “It was the final straw.”

Little did they know that seeing those plans fall apart would turn out to be a blessing and lead them to success.

“We couldn’t get out of the lease and, after lots of prayer, I told my husband that I wanted to open a boutique,” McWhorter said.

Two weeks later, in October 2016, she launched Sage Boutique on Main Street, named for her daughter, who was nine months old at the time.

“We were flying by the seat of our pants,” she recalled.

She said the goal of the boutique was to “offer more modern, trendy” clothing.

It took her a little time to perfect it, first dabbling in children’s clothing, but eventually she found her niche.

“I’ve loved every minute of it,” McWhorter said, stating the shop specializes in women’s clothing.

“Dresses, jeans, things like that,” she said, adding that she likes to get to know her customers and cater to their tastes.

“I try to fine tune things,” she said. “And I do lots of research on trends and try to notice them. It’s sometimes a few months before they hit here.”

She said they have focused on carrying as much local clothing as possible, such as items by New Frontier Clothing in Morehead.

McWhorter said the response has been quite positive.

With the success of the boutique, the McWorters have decided to expand. They have relocated the boutique to 134 Beauty Dr., in a larger building, which will be home to four businesses.

The Boiler Room will house Sage Boutique, as well as her husband’s video production company. They will also operate Cup and Kettle, a tea and coffee business, from the building.

Joining the couple at the location will be Heather and Seth Carroll, who will run Grace House and the Empty Spoke bike shop.

McWhorter said their goal is to operate as a small business “hub” for Grayson.

“We want to have all things cool,” she said. “We want to make a nice, hip place where people can come into and feel comfortable hanging out.”

She said they hope to feature as many local creators’ goods as possible.

“Working with other business owners is super important,” she said, stating that she hopes to return the support she has received.

“I feel a duty,” she said. “As a small business owner, you should help.”

She said the new location also has a large backyard, which will allow them to host options such as outdoor yoga and the possibility of having a yoga session with goats, something she said has taken off in some areas.

“People like unique things, and we plan on having that,” McWhorter said.

She said they are also considering the idea of a film festival, in which movies would be projected on the building.

She describes all four of the business owners as very outdoors oriented and said they would like to be able to steer people to parks in the area.

“So they look in our own backyard and see the treasures we have in our community,” she said.

She described Grayson as a place they “enjoy and love” and said she hoped the Boiler Room could help bring people to their town.

“We should be a cool community that people can come and get lost in when they pull off the interstate,” she said.