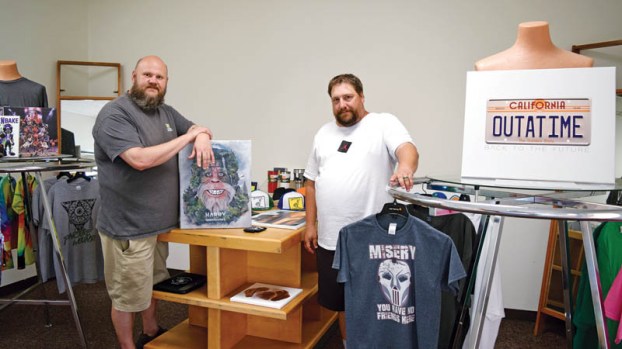 Sean Daniel and Blake Baker stand in front of a display of their works at Daniel Baker Design Company in Coal Grove. The pair does all kinds of media, from printing T-shirts to web sites to videos.

Daniel Baker Design Company does media, from shirts to web

COAL GROVE — Daniel Baker Design Company of Coal Grove does a lot for its customers.

They can design logos. They can print on anything from T-shirts to canvas to wood, even on concrete. They can shoot game videos. They can take photographs. They can even build web sites.

While the company isn’t having its grand opening until Aug. 1, Blake Baker and Sean Daniel have been quite active, like mad scientists in their lab at 209 1/2 Marion Pike.

“We’re not just a print shop,” Daniel said, although recently they did crank out a football team’s worth of jerseys in one afternoon before their scrimmage. “Other places will say that a five color shirt will take a week or two. If we aren’t busy, we can do them in a single afternoon.”

Daniel Baker Design Company has recently done commercials for a Toyota dealership in Fresno and Las Vegas. Baker recently sold shirts to a New York baseball championship.
Daniel was an electrical engineer but gave it up because it didn’t satisfy his creative urges.
“I hated it. It’s hard to put heart in a wiring job,” he said. So, he went to Ohio University Southern and took the Electronic Media courses. He graduated and even worked as a Special Projects Producer at the school.
Baker was a supervisor at Walmart for the past six years. After the birth of his son, he wanted to do something more with his creative mind and his love of sports. He said his son is decked out in one of kind items that he created.
“That is part of the reason I’m here, why should I pay someone else when I can create it myself,” he said. And he wanted to be part of something to support the local sports teams that he loves.
Baker said his favorite is doing one-of-a-kind pieces for people, whether it is taking a family photo and putting it onto canvas or turning a child’s artwork into a T-shirt.
“Like my boy, he wants one T-shirt, he doesn’t want 10,” he said. “I like creating pieces that people aren’t going to get anywhere else.”
Surrounded by printing machines, the pair has been experimenting with all types of surfaces to see what they can print pictures and logos onto. They have created posters for local businesses. For the first Flashback Fridays Cruise Line in Ironton, they printed the logo onto tiles for the people cruising around in their classic cars.
They have printed artists’ works onto canvas that feel painted. They have turned concrete pavers into headstones for beloved pets that have passed away. They made a giant quarter with raised ridges. And they are designing and printing T-shirts trying to find the best look for a particular piece of art or make a shirt logo glittery and shiny.
“I’m not saying that it’s the equipment that sets us apart,” said Daniel. “It’s us… it is us being creative.”
“But the machines help,” Baker said.
Daniel said they are trying to build their own machines too.
“We are going to try to put pictures on shoes,” he said, adding they are going to build a platen so they can use their UV printer to print a graphic directly onto cleats. “That way if a player wants to honor someone who has passed on, we can do that for them. Normally, if you want that done, it has to be painted on the shoe and it can get expensive.”
Daniel and Baker said they are always trying to think outside the box.
“We’re not stuck inside of the box, we have been outside it for a long time,” Daniel said.
Baker said they could do the whole package for customers.
“It’s not just stop here and get the shirts and then go down the road and get something else,” he said. “With the same file, I can print the shirt, embroider that shirt, I can put that design on a tumbler, on a koozie, a piece of wood, on glass. It is ridiculous. Basically, we are people’s own marketing firm. You can come in get a T-shirt and turn around and get a web site or a highlight video of your kid playing ball.”
Locally, they have designed shirts for Granny’s in Ironton and some of their shirts are for sale at Dick’s Music Shop in Ironton.
You Might Like

Highlands museum hosts Summer Kids Fest ASHLAND — Children and families had an opportunity for fun and learning during an... read more