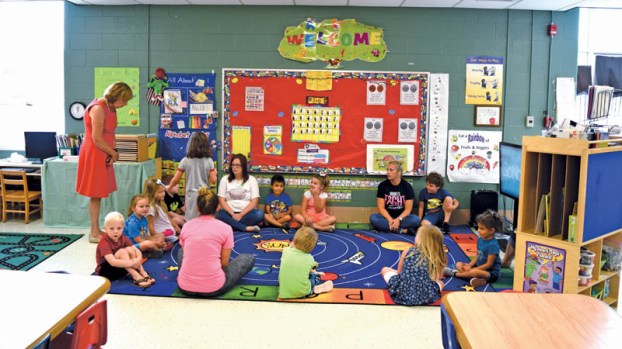 Frances DeWine watches as a student counts the number of girls and then the number of boys in the pre-kindergarten class of Lindsey Harper on Friday at the Ohio University Southern Child Development center in Hanging Rock.

Preparing for the future

Frances DeWine, the wife of Ohio’s Attorney General and gubernatorial candidate Mike DeWine, stopped in Lawrence County on Friday as part of her tour around the state.

Her first stop of the day was at the Ohio University Southern Child Development center in Hanging Rock, which is part of the Lawrence County Early Childhood Academy.

The academy has children from 6 months old to 5 or 6 years old. The goal is to prepare them to be ready to enter kindergarten with all the skills they need.

Phyllis Newman, the parent/family/community engagement manager for Lawrence County Early Childhood Academy, said Frances DeWine was there because she is very interested in the type of things children are learning at the facility.

The Lawrence County Early Childhood Academy and its 10 affiliated sites are one of the few childcare programs in the state to get a five star rating.

Mary Cade, the site coordinator for the Ohio University Southern Child Development center, said they prepare the children for kindergarten.

“We are a school readiness-based program,” she said, adding that people sometimes wonder about school prep for kids who are infants or toddlers. “You have got to start young.”

Frances DeWine and her staff toured the facility, starting with the 6-month-old class, and then went to the toddler class where some kids were enjoying story time while other played with bubbles.

Then it was to the class for the kids in kindergarten prep where she was peppered with questions from an inquisitive boy who wanted to know who she was. She explained and added she had eight children and 23 grandchildren. That seemed to satisfy the boy and he returned to working on his puzzle.

Frances DeWine said she was trying to get to all 88 counties in Ohio.

“Mike can’t get everywhere, so I like to go for him,” she explained. “It gives me a chance to see the great programs that are going on throughout the state; to see what can be done and what needs to be done.”

She added that the Lawrence County Early Childhood Academy is an example of a great program.

“They are five star, I’ve seen some that aren’t five star,” Frances DeWine said. “This is great.”

Last month, Mike DeWine rolled out a number of policy points about children he would like to see including foster care reform, expanding early childhood education, increasing eligibility for childhood programs and getting a mental health professional in every school.

Frances DeWine said a big part would have childrens’ programs to better prepare kids for school.

“When they start kindergarten, we want them to be ready for kindergarten. Some kids have half the vocabulary of other kids; how can we expect them to compete?” she said. “But this is wonderful to see what you have here in this county.”

After her visit at the childhood academy was over, Frances DeWine headed to Collins Career and Technical Center before heading to Gallia County.

The UnderDawg restaurant is now a staple at Ironton Elks Lodge 177, serving up southern-style food, from chicken wings to... read more