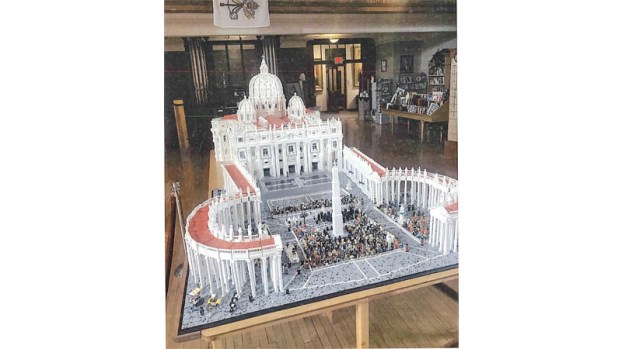 A recreation of the Vatican in Rome at the Jubilee Museum in Columbus. It is 15X17 feet and is made up of a half million Lego pieces.

The art at Jubilee

COLUMBUS — Jubilee is a celebration, commemoration and festival.

Father Kevin Lutz not only runs a museum called the Jubilee Museum in Columbus, but he has reason to celebrate.

The Jubilee Museum is celebrating its 20th year since Lutz founded it in 1998. The museum is a way of preserving historic Church treasures of art and history. Nearly all the inventory has been donated and it currently is valued at more than $4 million.

One of the items currently on display at the museum is a model of The Vatican. What makes this model unique is the fact it is made entirely from Legos from the rotunda down to the people on the streets.

The Lego Vatican is 15×7 feet with more than 500,000 pieces. It was built by Father Bob Simon of Scranton, Pennsylvania, who worked on the project from 9 p.m. to midnight every day for 10 months.

Lego makes people but not nuns, so Fr. Simon used some ingenuity by putting a Darth Vader helmet on backwards to create a veil.

Among other interesting items are a 1558 Bible, printed in Paris by the first woman to ever own and run a printing press.

There is an altar Missal from 1501, a time period when Christopher Columbus was still sailing the oceans and Michelangelo was still painting. Overall, there are hundreds of Bibles, Lutheran Bibles and a replica of the original King James Bible.

There is a chalice with many gem stones that belong to Mary Queen of Scots, four working pipe organs, more than 100 oil paintings, 300 nun dolls, a dozen life-size mannequins in habits along with many other gifts that tell the story of faith.

“We now fill three warehouses and 24 rooms of the museum,” said Fr. Lutz, who said the museum is the former Holy Family elementary and high school building.

The school’s cafeteria is now a soup kitchen to feed the needy. It is a project of the parish.

There is a large Holocaust collection that includes the works of Alfred Tibor who was a Holocaust survivor and sculptor.

The museum has sent many usable items to 11 different states, as well as places as far away as Karaganda, Kazakhstan, South American, Africa, the Philippines and Mexico.

“Most importantly, we are teaching the faith. Every year people leave the church and it is often — not always — because they were never well instructed,” said Father Lutz.

“We do not in any way try to convert visitors, but this year an RCIA program will run in the museum and a few guests over the years have converted and some Catholics have returned to the practice of their faith.”

The first item of the museum was a personal artifact that belonged to Fr. Lutz. It was a wooden tabernacle that he obtained as a teenager. The church he attended was cleaning out the basement and he found it very interesting.

“That is probably what lit the fire in me. That tabernacle is still in the museum,” said Fr. Lutz.

It was the collecting of artifacts by Fr. Lutz that initiated the museum. He kept seeing things being discarded and ending up in restaurants or used as lawn décor such as a baptismal font.

“I just began collecting things and a number of items were going back into churches that were needy and others became parts of the collection,” he said.

As the collection grew, it caught the attention of the hierarchy of the Catholic Church and the Vatican was informed.

Fr. Lutz found out about how much attention he had garnered one day with he received a letter from Pope Benedict.

“I got a letter and it was interesting because I opened it up and the whole letter was in Latin and addressed to me,” said Fr. Lutz. “I’m thinking, Martin Luther got one of these once and it wasn’t good news.

“I took six years of Latin. I’m reading it slowly and I think, ‘Oh my goodness! I’ve been appointed to a pontifical commission.’ So, I have done what I could for that commission which is basically restore historical preservation. They were very pleased there was a priest who had already started the project before they hardly got the letter out asking every diocese to start the museum.”

Most of the diocese had only a little memory room while the Jubilee Museum is an entire building filled with treasures both Catholic and non-Catholic.

Lutz himself financially supports many worthy causes such from Wounded Warriors — his father and uncles served in World War II — to the Benedictine Sisters.

“I need (the nuns’) prayers,” Father Lutz said with a grin.

There is one item that continues to elude the museum: one of two church bells from the Franklington neighborhood.

One bell was sold and Fr. Lutz has been trying to recover the item.

The missing bell is bronze with a green patina or glaze. It is between 20-28 inches tall and 20-plus inches wide. The words “VanDuzen and Tiff” or “Buckeye Bell Foundry” are on the upper rim.

As for the museum, anyone interested in making a donation or just wanting information to visit may go online to jubileemuseum.org and find the “subscribe” line and read the process, or send a donation to The Jubilee Museum, P.O. Box 164234, Columbus, OH 43216.

Preparing for the future