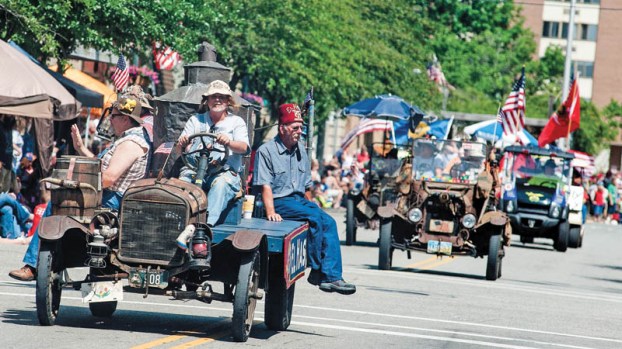 Members of the El Hasa Shriner Temple’s Hillbilly Clan 1 Outhouse 8 in the 2017 Ironton-Lawrence County Memorial Day Parade. The group will be hosting Hillbilly Day at Pick‘n Save on Saturday, with funds going to Shriners children’s hospital efforts.

The public is invited to come out for a day of country-themed fun for a good cause on Saturday.

Members of the El Hasa Shriner Temple’s Hillbilly Clan 1 Outhouse 8, a familiar sight to attendees of the Ironton-Lawrence- County Memorial Day Parade, will be hosting Hillbilly Day at Pick’n Save from 10 a.m.-4 p.m. on Saturday.

All funds raised from the event will go toward Shriners children’s hospitals, and the transportation fun to take children to the locations in Lexington, Kentucky and Cincinnati.

The group will have their signature vehicles on hand and will be selling hot dogs and chips, Roger Morgan, raban for Clan 1, said.

They will also be selling raffle tickets, for $5 each, for a chance to win a pair of OSU Buckeyes football season tickets.

Morgan said this is the group’s third year for the event. Last year, Evelyn Owens, of Ironton, won the tickets. This year’s winner will be drawn in Columbus on Aug. 13.

The Ironton Hillbillies were established in 2010, as an outhouse for the hillbillies, a national group, which began with a clan in Ashland in 1970.

The group hosts a number of fundraising efforts throughout the year, such as onion sales, which go toward paying for the fleet of vans that the Shriners’ “A team” drivers use to take children and their families to the hospitals.

The Ironton Hillbillies have passed more than $100,000 in donations for the cause.

Each April, outhouses from across the country descend on Pikeville for Hillbilly Days, a three-day festival featuring a carnival, parade, a hillbilly beauty pageant and live music, all with the goal of raising funds for the hospital and transportation effort.

The art at Jubilee